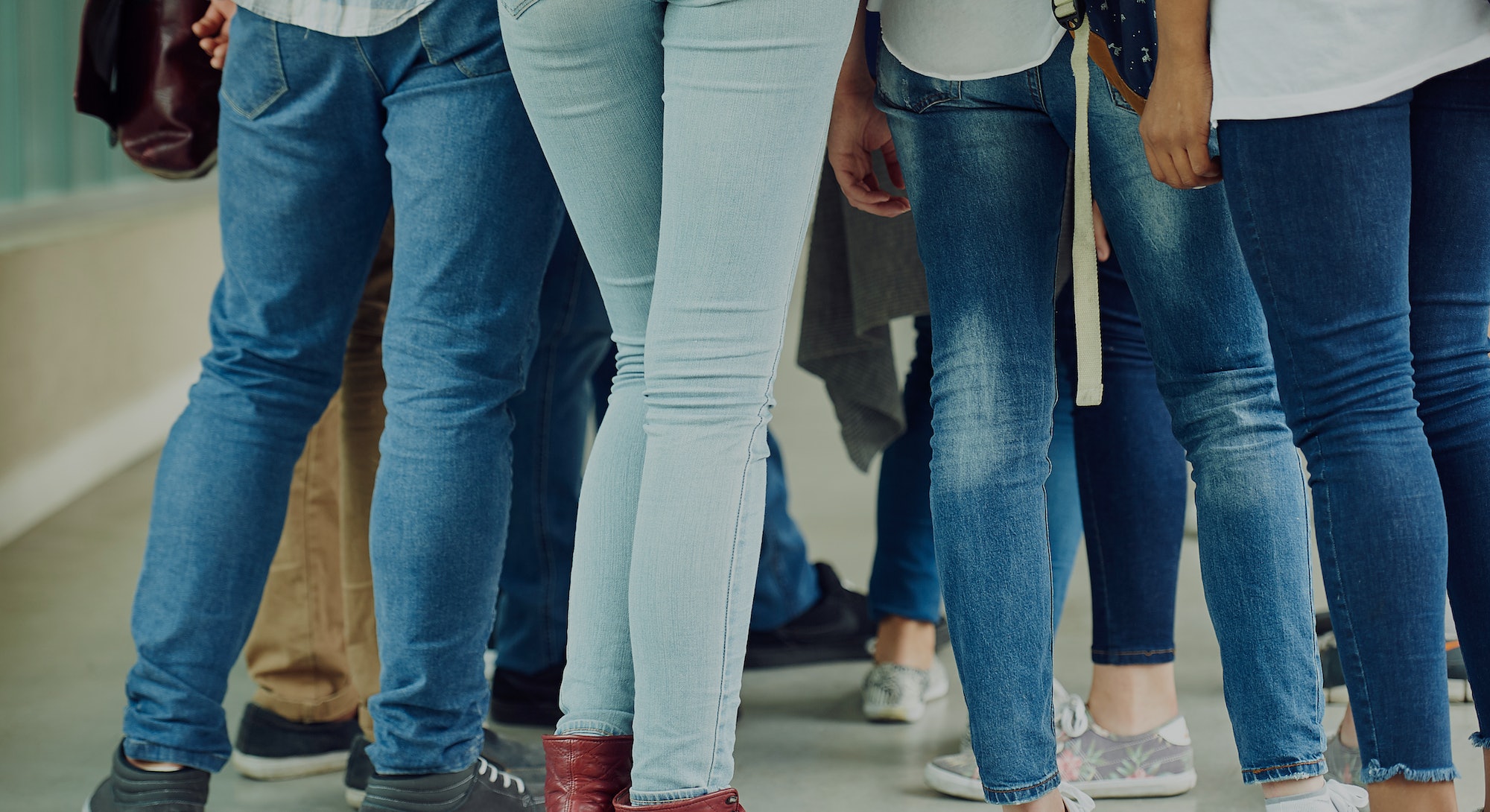 At least according to Gen Z, those born from 1997-2012, who at the beginning of the year launched a tirade against the form-fitting style and anyone who continued to wear them. Now, wearing skinny jeans is an admission that you’re just as aged as the style itself.

Obviously, millennials — who grew up on the skintight jeans and continue to don them — didn’t take kindly to Gen Z’s fashion opinions. Some took to the younger generation’s preferred app, TikTok, to declare they would not take style advice from “the generation that ate Tide Pods.” One songwriter, Sarah Hester Ross, even went viral with a since-deleted Gen Z diss track: “You can pry these skinny jeans from my cold dead ass, ya hear?”

Seemingly overnight, the “OK Boomer” meme became the “OK Millennial” meme. No longer were boomers launching an attack on millennials for not owning houses thanks to frivolous avocado toast purchases — instead, millennials were treating Gen Z as the new “other” for pointing out that a favored style, well, isn’t so favored anymore. And according to Gen Zers, being out of style is synonymous with being old and out of touch.

Still, a younger generation isn’t going to stop millennials from wearing a denim style they’ve clung to for over a decade. Outside of TikTok and Twitter, jean discourse is pretty much obsolete. Fashion retailers, however, are listening — and certainly don’t want to appear out of touch to their young and growing consumer base. Unfortunately for the older generation, Gen Z has the leg up on the jean market: Not because their jeans are looser and more flexible, but because the younger generation is always the most desirable marketing demographic, thanks to their stack of disposable income and influence on others.

Millennials may begin to notice skinny jeans disappearing from store windows and racks, either pushed to the backroom of retail locations or only available online. Gen Z-favored shop Urban Outfitters carries the style online, but you won’t find a single pair in-store. Slowly but surely, skinny jeans are becoming less attainable to the average consumer, at least in person. Young people are proving in real-time that if anyone can start or end a trend, it’s them.

Skinny jeans aren’t a fad — they’re a “staple,” Mandy Lee, a trend researcher and 30-year-old millennial, told Input. “I don’t think they’ll ever disappear out of the trend cycle completely.” Unlike statement pieces, jeans have been in style forever, she said, and even “from a sales perspective,” skinny jeans won’t be going away. “It would be foolish for brands to eliminate that style completely out of their selection,” Lee noted.

“It would be foolish for brands to eliminate that style completely.”

While Gen Z’s refusal to wear the form-fitting style may push them to the backs of closets — and diminish skinny jean production rate in a simple equation of supply and demand — the denim skinnies are still a classic. All we’re witnessing now is “a shift in selection,” Lee said.

Back in the early 2000s, “around 2006,” Lee recalled, was when skinny jeans first became popular. Styles like mom jeans and straight-legged jeans had reigned superior before the form-fitting denim came in to show off curves and cute shoes. But those that continued to wear such loose jean silhouettes weren’t looked down upon — online or in real life, Lee said. Now, with the help of apps like TikTok, it’s easy for people to “pass a sweeping generalization about an entire category,” such as skinny jeans, Lee noted.

As a possible everyday style, jeans aren’t a trend, she reiterated. “It’s based on personal style.” Lee pointed to influencer Victoria Paris, who published a viral TikTok on buying the right jeans for your body type. “I have a low ass, so low-waisted jeans look best on me,” Paris said in the video, while showing an array of jean types on her body. “You need to know your body shape to get the right jean type,” she continued, while slapping her own, lower, butt.

Living in Brooklyn and working as a trend researcher, Lee noted jean styles are currently “all over the place.” Skinny jeans may be less popular, but people are simply following Paris’ advice: “When it comes to jeans, it's really more about the style that works best for your body type and what you feel comfortable in,” Lee added. “They’re just too classic of an item to really put limits on.”

Most millennials won’t change their wardrobe because of online discourse, Lee said — and they certainly won’t change their look if that’s what’s most flattering on them. “Personally, I don’t really care,” she added, noting she’s mainly preferred the look of straight-leg jeans. “It’s more about how you style something than a specific piece of clothing.”

“[Skinny jeans] can be styled really well, usually by millennials or older generations, but you won’t be seeing me in a pair,” Taya Christianson, 23, told Input. Born in 1997, Christianson barely makes the cut for Gen Z, though she doesn’t consider herself aligned with the younger generation. Her feelings on skinny jeans, however, resonate with the discourse: “I hate skinny jeans so much that I donated every pair I own last year,” she said.

“When I put skinny jeans on, I hate the way they look.”

Christianson noted she’s currently on the hunt for bootleg and bell-bottom jean styles, in order to flatter her shorter physique. “When I put skinny jeans on, I hate the way they look and don’t like how they bring me to my awkward middle and high school fashion phases,” she said. Speaking to Paris’ earlier point, Christianson added, “I find [skinny jeans] uncomfortable, unnecessarily expensive, and difficult to find the right fit for my body.” Even when she owned the skinny jeans she donated, Christianson said, she wore each pair “less than ten times” in the three- to five-year period she owned them.

And whether you’re a Gen Zer trying out flare jeans or a millennial struggling to leave skinny jeans behind, “it’s silly to wear a basic you don’t even like,” Lee added. In Christianson’s case, adhering to what was trendy didn’t work for her — simply put, you won’t wear something if you don’t feel comfortable in it.

Now more than ever, it’s important to find your own personal style to avoid getting caught up in micro-trends and TikTok discourse. As styles change over time — and they will — consumers should feel comfortable physically and mentally in what they’re wearing. Looser jeans are here for now, but the revival of ’00s fashion, the era ruled by skinny jeans, may see the form-fitting style return.

While “it’s still too early to call,” Lee said, the very generation that tried to cancel skinny jeans may be the same ones bringing the silhouettes back in a Y2K iteration. “I could see some version of low-rise, bejeweled, or Apple Bottom skinny jeans coming back,” said Lee.

But TikTok discourse — at least the skinny jean debate — can rest for now. The denim shift won’t occur for another “five to ten years,” according to Lee, and it seems both millennials and Gen Z really don’t care all that much about what denim styles people are opting for. You aren’t old if you’re still wearing skinny jeans; just look at it as being ahead of the next style.