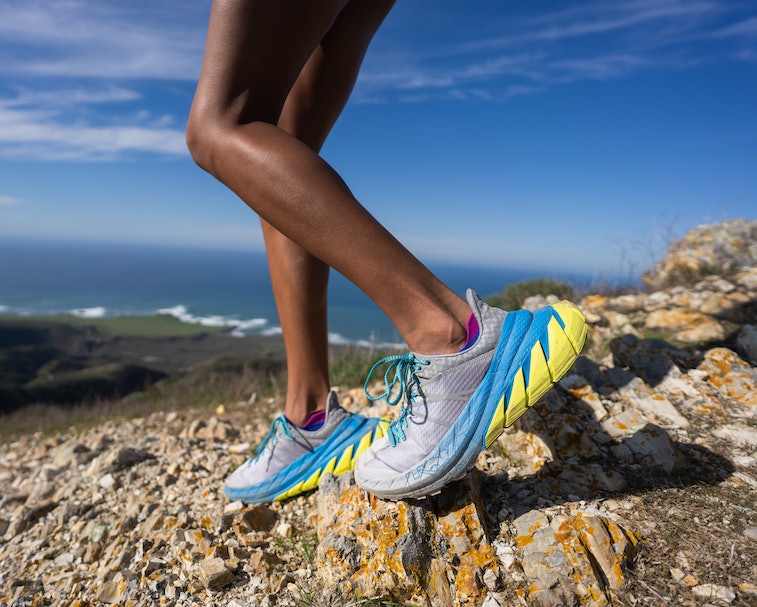 In just over a decade since its founding, Hoka One One (pronounced oh-nay, oh-nay) has cemented a foothold with hardcore runners that's just happened to be adopted by the fashion crowd. Its self-described maximalist sneakers are designed for increased stability and a more efficient stride, particularly when it comes to downhill running. Thick but lightweight cushioning has been the through-line for Hoka's sneakers, making them supremely comfortable even for non-runners. Just as bold are their color schemes, which often favor the brightest of hues.

Together, these factors have made for a sleeper hit amongst the "in-crowd" — from appearances on the feet of Virgil Abloh to collaborations with brands like Opening Ceremony and Engineered Garments. Still, Hoka will always let function drive its creations — and I'm curious to see if its latest output can be deemed "fashionable."

What in the world is that heel? — Today, the brand has unveiled the new TenNine trail shoe featuring a completely bonkers midsole. That bulbous growth you see in the rear is known properly as a "heel extension," and it's designed to reduce impact on a runner's heel, especially while running downhill. Consider it the logical extreme of Hoka's 11 years of maximalism.

By maximizing contact with the ground, the TenNine's supposed to offer a smoother transition as a runner's foot goes from midfoot to forefoot and toe-off. The heel sits at 33mm high, 4mm above the forefoot. In total, there's 360g of cushioning. Bolstering its hardcore bonafides further is a Lycra vamp that adjusts to accommodate foot swelling over long distances.

"The TenNine is designed to create the smoothest experience and create the feeling for runners that they can cruise forever," Hoka VP of product Gretchen Weimer said in a press release. "It’s not about the speed, it’s about the journey, and it’s about getting into a rhythm and a state of mind to go forever in a continuous flow.

Now who's courageous enough to wear it in everyday life?

I sincerely hope it catches on with fashion folk, even though the days of chunky sneakers are drawing to a close. Let's give the trend one last hurrah with this absolute unit, this king of the beasts. Whatever fun we might have can only be supplanted by the comfort.

Buy in — The TenNine is available now for $250 on Hoka's webstore, as well as select retailers. Whether it catches on with clout chasers such as myself or not, real runners are sure to love it.