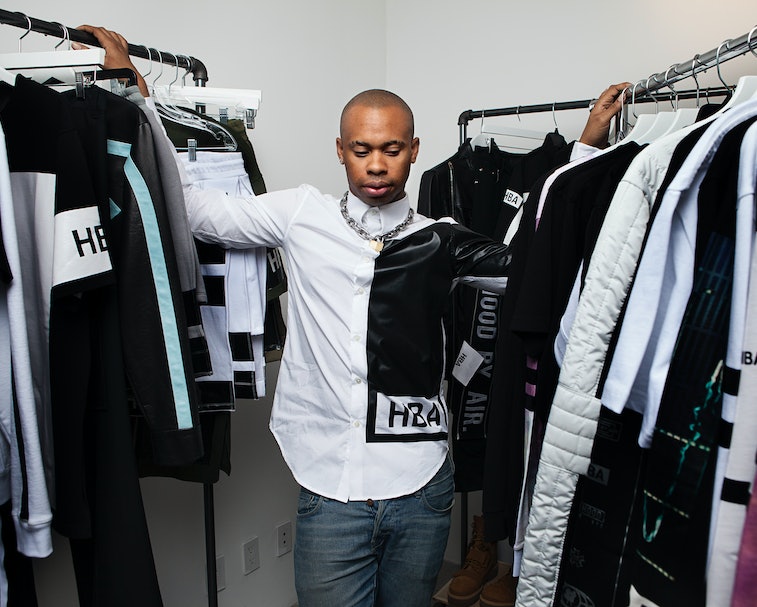 Three years after going on hiatus, Shayne Oliver has announced the return of Hood By Air. The label will return with four distinct divisions: Hood By Air, HBA, Museum, and Anonymous — the latter of which will provide a platform for young creatives.

Fans of the brand won't have to wait long for new product, as Hood By Air will launch a limited-edition T-shirt Thursday in conjunction with the British charity Uprising. It'll also release a Cash Card made with Cash App that features a metallic grid of EMV chips. Proceeds from both will go to Black Trans Femmes in the Arts, Emergency Release Fund, and Gays & Lesbians Living Together in a Transgender Society.

"13 years ago, Black and POC creatives started Hood By Air, creating something entirely unique in fashion," the brand said upon announcing its return. "Over a decade later, we continue to produce objects and artifacts that transcend attitudes and ideas in order to challenge what luxury means for future audiences."

HBA was a force of the 2010s — Oliver, a Black and gay designer, made Hood By Air into one of the defining brands of the decade by combining elements of streetwear and luxury while challenging the norms of gender before unisex collections became more common. '90s club culture has been essential to the brand's sensibilities, and Hood By Air had been a mainstay in the Black and queer communities before going on hiatus. The brand's return has been eagerly anticipated by fans and brings back one of the originators of high-end streetwear that's come to dominate the luxury sector.

"Shayne Oliver's existence and the culture that created Hood By Air in my mind are vital to what we have today as a mixture of fashion and so-called streetwear," Virgil Abloh told Complex in a vital retrospective on the brand. "In one word, I would say HBA and Shayne's vision showed the fashion system at large what the word freedom meant. From garments to runway shoes, everything exudes freedom."

The four divisions — Hood By Air proper will hold an event or activation each year with a new theme that informs "collectible fashion products." The COVID-19 pandemic has only highlighted the need to rethink the industry's runway schedule, and by holding just one show per year Oliver might be showing a path forward.

HBA looks to be the more accessible division, announced as a direct-to-consumer platform with products that continue the same thing. Meanwhile, Museum will be home to Hood By Air's archives, which will be reinterpreted in new collections by designers-in-residence.

What may be most exciting about Hood By Air's return is Anonymous Club. The division will serve as an incubator and platform for emerging artists and musicians who may then have the opportunity to work with Hood By Air and HBA through in-house creation and collaborations.

"In recent years we have seen the creative industries distance themselves further and further from real culture," Hood By Air said. "The youth have been robbed of the physical and psychological spaces necessary for new ideas to grow. The system is antiquated, and we want to replace it with something new. There is another world that needs to be created. We've done it before, and we're doing it again."