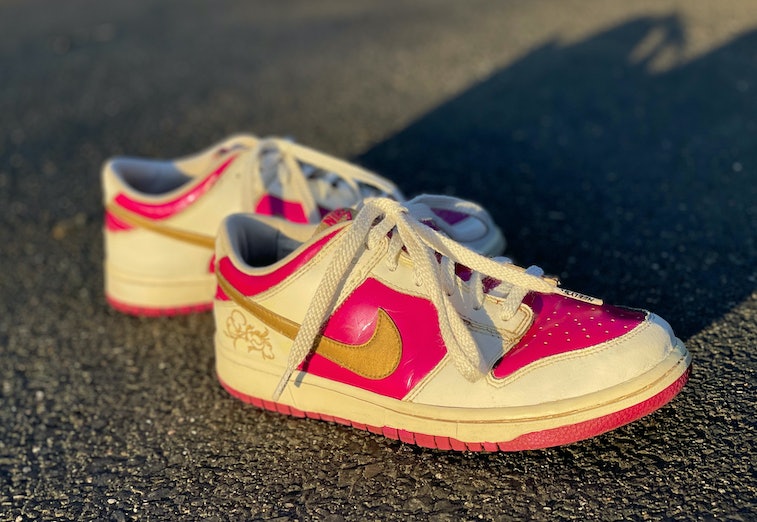 Since last year, it’s been nearly impossible to score a pair of Dunks without shelling out hundreds of dollars above their original price. When Nike drops new pairs on the SNKRS app, they sell out in minutes, so I've come to terms that my chances of ever copping one of the latests Dunks are slim.

It’s not as if there haven’t been enough opportunities. Nike has been rolling out waves of Dunk models since 2019, and even added the sneaker to its customization program. But releases sold out too quickly for me to catch, and the Nike By You drop failed miserably on the brand’s end. Now SNKRS, the app where most of the Dunk models are sold, has limited the silhouette to lottery-based draws. The move is supposed to distribute the sneaker more fairly, but after Nike’s recent sneaker reselling scandal, I’m not quite sure I trust the brand anymore.

Leaving Nike out of the purchase isn’t a small feat, though. On StockX, Dunks can average upwards of $400, and cheaper sites like eBay still settle around $200 for the silhouette. Being a woman in the sneaker world also limits the pairs available to me to begin with — those with smaller feet often have to pay a bigger price for their desired shoe. The highly coveted Syracuse Dunk Low, for example, averages around $550 for sizes 8.5 to 11.5 on StockX, while sizes below or above range from $700 to $1,500.

Luckily, there are cheaper options for resale, but sometimes the price is more costly than what the sneakers are listed for. On Depop, a reselling app favored by trendy teens, Dunks can sell anywhere from $100 to $400 — but also don’t come with the same authenticity guarantee that StockX and eBay offer buyers. It takes a trained and careful eye to spot fake Dunks, which there are plenty of. Where there’s demand, there’ll always be supply — even if that supply sports a lopsided Swoosh or off-colored branding.

All of this adds up to sifting through hundreds of listings, searching for a reasonably priced, authentic Dunk sneaker in your size. After a few weeks of scouring the platform for the silhouette, I stumbled upon a beat-up pair for $15. Covered in dirt and creases, they were priced low for a reason — but as desperate as I was, I thought, “I could fix these.” Surely, it would be easier to fix up an old pair than land a new one… right?

Cleaning sneakers was a skill I had already acquired from college, when I was too broke to drop money on a rotation of shoes. Instead, I relied on OxiClean, whitening toothpaste, and an iron to keep my selection at the time — a pair of white AF1 Jesters — from looking too raggedy. When my discount Dunks arrived, however, I knew it would be a project unlike any other.

In person, the shoe’s creases were even more significant, among other signs the sneaker had lived a full life. The design, which research discovered was “Rave Pink Gold,” had originally been sold in 2005, and it looked like the previous owner had left them in the closet since then. A concentrated amount of dust and dirt had settled into the Dunk’s insole, creases, upper, and shoelaces. These sneakers didn’t need some love — they needed devotion.

The next step — getting the creases out of the Dunks — was the hardest and most stressful part of the cleaning process. After what looked like years of wear, the sneakers had been considerably rumpled, and clearly hadn’t gotten the same loving treatment as my college Jesters. To ease the creases, I packed the shoes with paper to fill their shape and lightly steamed them with an iron. Then, I placed a damp cloth over them and gently ironed the dents as flat as I could. The operation was tedious — especially taking care not to burn the shoe’s metallic leather — but it paid off. While not all the creases could be removed, ironing them significantly altered their appearance.

At the end of the restoration process, the Dunks looked good — not new, but good. Looking back, it would’ve been much faster for me to buy a clean pair, but given the funds and stress I had saved, it was worth it. Finally, I had my hands on the silhouette — a retro pair, too.

Further digging into the sneaker’s history made the operation much more satisfying. The exact model I had restored — in a barely improved condition — is listed on GOAT for $500, while more prying revealed it was also up for sale on Poshmark for $270. Even a used pair on eBay, which also resembled the condition my now-refreshed Dunks, is going for $300.

While I don’t plan on selling my hard work anytime soon, it’s nice to see that it carries the same value — and exclusivity — as a pair bought off SNKRS. By buying used, I scored a genuinely rare retro pair, and sustainably sourced a coveted silhouette. I would highly recommend doing the same: A little elbow grease goes a long way, and could save — or make you — a couple hundred bucks.