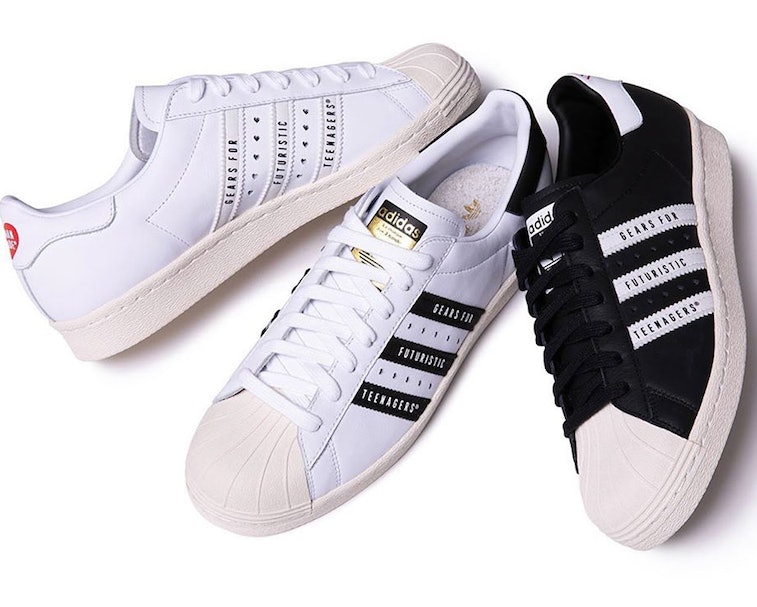 Adidas' Superstar revival continues in full force, adding Human Made as a collaborator on the classic shoe first introduced in 1969. Designer Nigo is offering a trio of Superstars set to drop this Thursday. The flourishes are small, adding small signature details from the brand to the iconic silhouette.

The deets — The focal point is Human Made's "Gears for Futuristic Teenagers" motto, which is printed across the three stripes. While the brand is popular with teenagers — as is Bape, the predecessor of Human Made — Nigo has often said he still feels like he's part of the demographic he caters to. The motto informs both his designs and his personal style, which remains very youthful.

Between the stripes are two rows of perforated hearts, and Human Made's logo appears on the heel. Besides those cues, the collaboration keeps the Superstar as you know it: simple, tasteful, and eternally wearable. With two pairs coming in white — one with black stripes and mustache, the other all-white — it's an ideal summer sneaker with the element of hype. All three pairs, including the black and white, feature a cream shell toe for a nice sense of contrast.

Securing the Superstar — All three pairs will go on sale at 11 p.m. EST this Thursday, April 9, through Human's website. That's only the pre-release, so look out for wider availability in the future. Pricing details have yet to be announced, but it shouldn't come in too much higher than the Superstar's typical $80 fee. Scoop these up for a head start on your summer rotation.