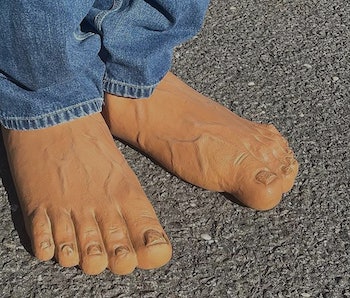 Back in 2013, Jim Carey showed up to Elton John’s Oscars viewing party wearing a pair of freakishly realistic “feet” shoes along with black jeans and a tailored jacket. While you’re unlikely to have the charisma to get away with wearing such garish footwear to a swank event, you will soon have the opportunity to wear something similar for whatever occasion you deem fit.

Imran Potato, the brand from the young designer Imran Moosvi, has teased a pair of slip-on shoes that look like human feet and bring to mind Carey’s infamous fit. The disturbingly detailed shoes feature veins, toenails, joint creases and all. And while Imran Potato hasn’t said what they’re made of, they appear to be constructed with a single piece of foam, rubber, or vinyl. Underneath, “Potato” is stamped into the outsole — making any tracks left behind even more outrageous.

Obviously, if you end up buying the shoe you’re doing it purely for shock value. But the number of times you can wear it before the joke runs thin is likely quite low, so perhaps it’s better looked at as a piece of art that just happens to be wearable.

No stranger to odd shoes — While the “feet” shoes take the cake for the strangest shoes we’ve seen from Imran Potato or any other source, the brand does have a history of making absolutely ridiculous footwear.

Earlier this year, Imran Potato released “faux Yeezy” slides that combined the Foam Runner and 450 into one look, as well as a backpack that looks eerily similar to the Nike Air Force 1. He’s also done up replicas of the Foam Runner in a host of nature-sourced patterns and made comically oversized slippers.

Outside of footwear, Imran Potato specializes in bootleg apparel with a clear line to Dapper Dan. Luxury motifs like the Louis Vuitton monogram and Gucci GG pattern have appeared on socks, rugs, and blown up suit, and more that have gained favor with a new generation of celebrities including Travis Scott, Lil Yachty, Billie Eilish, and Bad Bunny.

Now we wait — If you’re looking for a shoe even more unsettling than the Vibram Five Fingers with toenail polish, you’ll have to wait for Imran Potato to announce release details. Chances are the “feet” shoes will drop in the coming months, encouraging the most bold among us to get off their most absurdist fits.