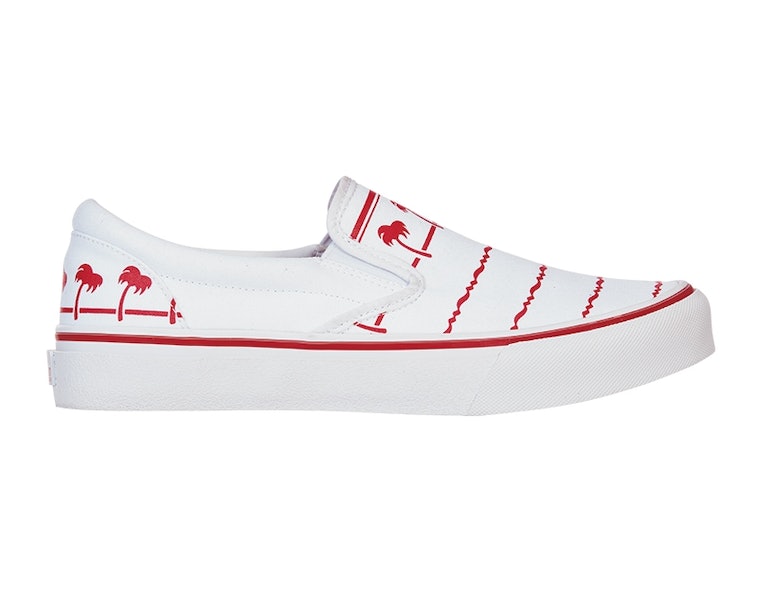 In-N-Out Burger does the merch game right, from its regionalized T-shirts that have been cool since Mikey wore one in Swingers to the “Drink Cup” socks that have become a regular choice for the fashion crowd. Now, you’ll have a new way to rep the West Coast’s best burger chain in the form of Vans-esque slip-on sneakers.

In-N-Out has launched canvas kicks to match its drink cups and the socks inspired by them. The silhouette is a classic slip-on boat shoe, made most famous by Vans, adorned by the iconic red pattern of palm trees and waves. On the midsole’s heel, where you’d typically expect a Vans logo, is In-N-Out’s badge, and it’s again printed on the red insole.

While I know better than to stir up the In-N-Out and Shake Shack rivalry, it can’t be denied that the West Coast fighter vastly outweighs its East Coast counterpart when it comes to merch. The new kicks are emblematic of California and a natural choice to wear all summer long, however far you may be from an In-N-Out.

The price is right — At just $65, In-N-Out’s Drink Cup Sneakers are now the second most expensive item on its wide-ranging store, behind only the the waterproof jacket. Affordability is one of the most important qualities for In-N-Out, and it’s refreshing to see that even its merch comes in consistently reasonable. Even the tees, the restaurant’s most iconic item, are just $12 to $15 a pop — which makes them incredibly easy to collect.

If you want to cop In-N-Out’s new shoes, you can do so now through its website. White is the clear best choice because it keeps the colors cannon, but you can also pick up a pair in black if that’s more your style.