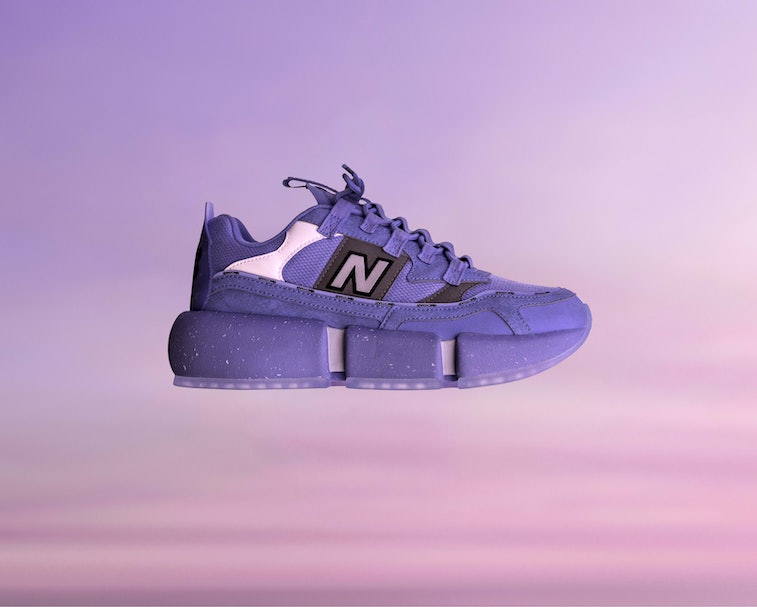 Jaden Smith and New Balance have announced their first collaborative sneaker — and although it's a certified unit, it may not be as crazy as you'd expect.

The New Balance Vision Racer is a lifestyle shoe with a beefy, partitioned sole debuting in a rich baby blue color treatment. Appropriately, given Jaden Smith's history of vegetarianism and environmental activism, it's made of vegan leather and recycled materials. And when considering Smith's love of the Louis Vuitton Archlight, which he once had customized with a New Balance logo, and generally daring wardrobe, the Vision Racer is surprisingly (but not entirely) tame.

More deets — The Vision Racer takes inspiration from New Balance's X-Racer and 1700, the latter of which was first introduced in 1999. An oversized heel tab gives it further heft and roots the sneaker in aesthetics from the late '90s and early '00s. That Smith was born in 1998 is of no consequence — the era is ripe for revisiting these days in sneakers and fashion.

The word "vision" printed underneath the translucent midsole in a 3-D font, which is as heady as the sneaker gets. Marketing veers toward Smith's favored cryptic statements — he once told me to tell the audience at my previous job that "a storm is coming" — with the tagline, "Do you see it?"

Do you see it and want it? — Smith's first release with New Balance will launch July 24 through the brand's webstore and select retailers. At $150, it'll be relatively accessible, and subsequent color variants to release later this year will give would-be customers another shot at it.

We've been saying New Balance is on a serious run in 2020, and that only continues here with Jaden Smith.