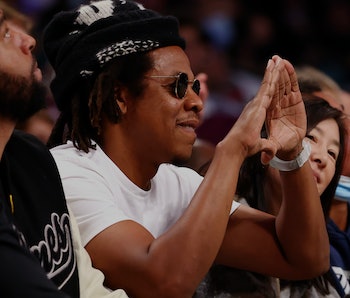 Online sports retailer Fanatics and a group of investors led by Jay-Z are acquiring Mitchell & Ness in a deal worth $250 million. According to Yahoo! Sports, Fanatics will hold a 75 percent ownership stake in the throwback jersey brand, with the remaining 25 percent being held by Jay-Z, fellow rappers Meek Mill and Lil Baby, LeBron James’ business partner Maverick Carter, and the TikTok famous D'Amelio family.

Jay-Z’s part in the acquisition marks a full-circle moment, as he was one of several rappers who helped usher in the popularity of (oversized) throwback jerseys in the early 2000s. “Fashion is cyclical but classics are forever. Mitchell & Ness is a true classic,” Jay-Z said in a press release. “I was an early adopter of this brand, as well as part of a departure from athletic wear. I’m proud to play a small role in bringing it back, and in some cases, introducing the authenticity and quality of the Mitchell & Ness brand to a new generation.”

Mitchell & Ness began manufacturing sports apparel in 1904 in Philadelphia, but in 1983 it switched its focus to reproduction of vintage jerseys. Today it holds licensing agreements with the NFL, NBA, MLB, and MLS, as well as select NCAA and HBCU universities. The brand also makes lifestyle apparel that’s non-team-specific and has engaged in several collaborations in recent years, including multi-sport shorts with Don C’s Just Don that have become something of a status symbol among younger demographics.

Will Hov start rocking throwbacks again? — Jay-Z’s style has evolved as much as you’d expect from someone who’s been in the limelight for nearly 30 years, and his attitude toward jerseys can be traced through his lyrics. On 2001’s “Jigga That N****” he rapped “Come on the track like duh-du-duh-duh/With a throwback jersey and a fitted.” He then opted for a slightly more polished look in The Black Album era and on “What More Can I Say?” rapped, “And I don’t wear jerseys, I’m 30-plus/Give me a crisp pair of jeans, n****, button-ups.”

The Hov of today is more stylish than ever, mixing black-tie apparel with buzzy streetwear and high fashion looks. He could very well begin to mix in throwback jerseys again to help bolster his investment, although we’re unlikely to see a return of the gargantuan proportions of the early aughts.

Fanatics plans to expand Mitchell & Ness’ product offerings and increase its presence in the global market, meaning we should see more of the latter brand than ever in the years to come. If throwbacks are indeed set to become the next trend, you can get a leg up now by finding one from your favorite team or historic athlete.