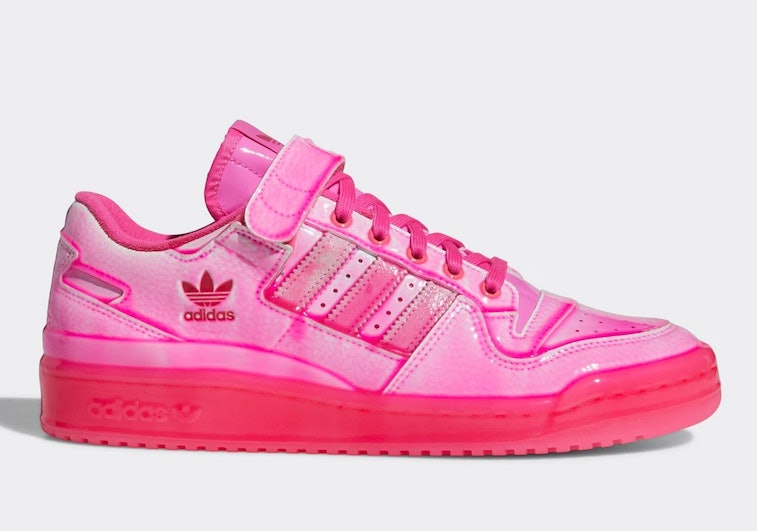 Jeremy Scott has been keeping sneakerheads fed ever since announcing the renewal of his partnership with Adidas. His constant rollout of designs — which now include jelly Forum Hi sneakers, teddy bear slides, and money-printed Forum Wings — has now expanded to include glossy Forum Lows, which arrive in fluorescent shades of yellow and pink.

As a classic Adidas model, and one of Scott’s past favorites to modify, the Forum sneaker serves as the perfect canvas for the designer’s return. And with careful social media promotion from indie influencers like Devon Lee Carlson, alongside recent collaborations with Bad Bunny, the Forum is set to dominate the coming months — meaning this neon shoe’s future could be a lot brighter than already pictured.

Jelly sandals, but make them sneakers — Fluorescent shades of yellow and pink ensure the jelly-like Forum Lows are the highlight of Scott’s first Adidas collection, while their weird, dripping uppers nod to the designer’s eccentric reputation. Certain areas of the sneakers sport a more opaque jelly look than others, making it look like whatever substance lies on top of the shoe was poured over it in a nonchalant manner.

Each sneaker features the Forum Low’s customary strap at the ankle, while the tongue’s usual Adidas branding has been replaced with a graphic of Scott’s face — in case there was any question about who designed the funky footwear. Matching neon laces and translucent sole units finish the two sneakers off.

Are you ready for this jelly? — According to Adidas, these Forum Lows will arrive this fall, though a specific launch date has yet to be announced. It’s likely a drop will align with New York Fashion Week in September, granted Scott isn’t too busy with his work at Moschino.

Jelly-like Forum His, which debuted in June, are expected to launch alongside their shorter, brighter counterparts. Arriving in vivid shades like orange, blue, teal, and grayish-black, the sneakers are less blinding but equally covetable.

No pricing information has been made available for either shoe, but rumors suggest the dripping Forum Lows will retail for $160, making them even more expensive than Nike’s own Scott collaboration; the hyped Travis Scott x Fragment Design Jordan 1 Low sneakers cost $150. But while one Scott has clout, the other has history — Jeremy’s shoes are a legacy for Adidas, and one worth paying for at that.