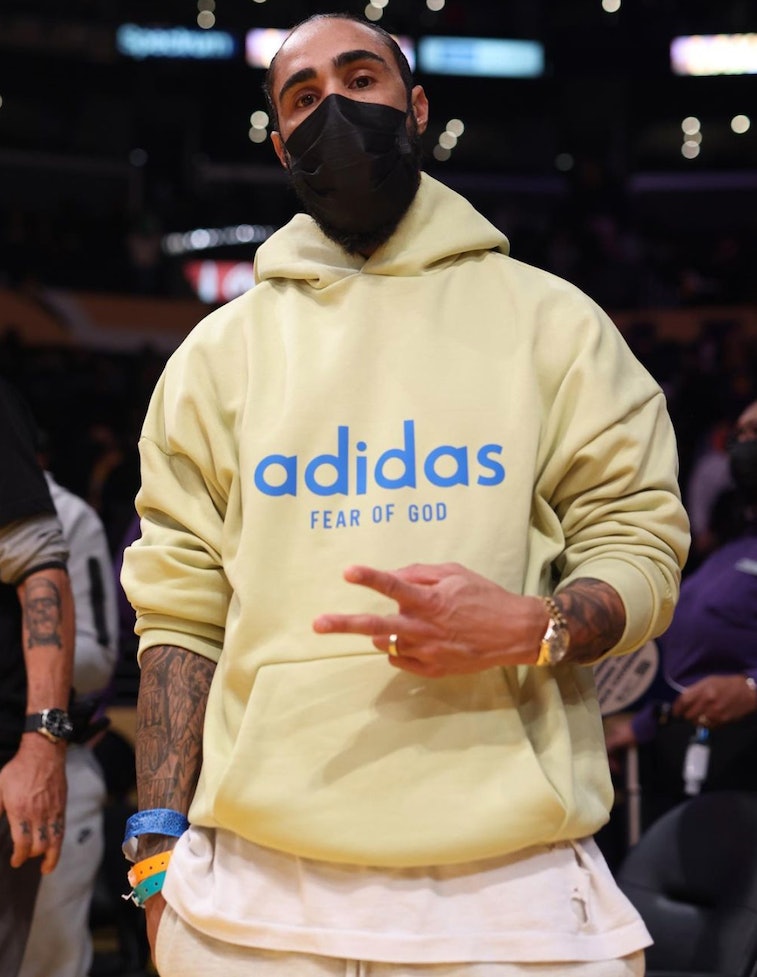 After establishing a long-term partnership with Adidas last year, Jerry Lorenzo is giving us a taste of what’s to come from the collaboration. At a recent Los Angeles Lakers game, the Fear of God designer teased a yellow hoodie complete with light blue co-branding, causing many to speculate the apparel is part of a bigger Fear of God Athletics collection.

Lorenzo’s partnership with Adidas put the designer in charge of the creative and business strategy for the brand’s global basketball division, which has slumped over the past few years. It was hoped that Lorenzo’s influence — and his previous best-selling models for Nike’s own basketball division — would elevate Adidas’ significance on the court.

The collaboration also confirmed the establishment of Adidas sub-label Fear of God Athletics, the third offshoot of Lorenzo’s brand alongside its main collection and Essentials. Centered around performance basketball and activewear products, FoG Athletics is said to be inspired by Lorenzo’s combination of street and sport designs.

Lorenzo’s first look — A year after inking his deal with Adidas, Lorenzo has kept quiet about what to expect, until now. His co-branded yellow hoodie — later teased on Instagram in a series of posts — marks the first piece from his Fear of God Athletics line. Accordingly, the apparel sent fans into a frenzy, with many asking when the sweatshirt would drop. One commenter impatiently noted they had been “patiently waiting for some time” for its release.

Standby for a bigger release — As of now, the designer has yet to share any more pieces from the FoG Athletics line, though by the looks of the hoodie, people can anticipate additional athleisure apparel soon. Neither Lorenzo nor Adidas has announced a release date for their first collection, but we’re hoping the hoodie is a sign of good things to come soon.