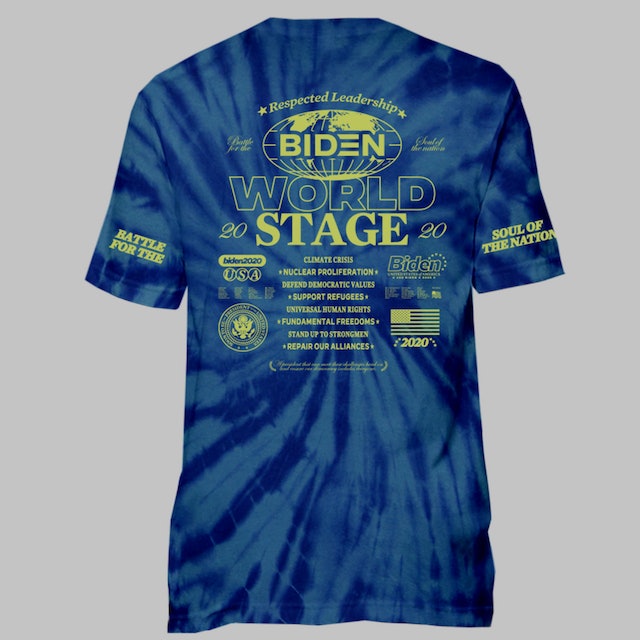 Tie-dye, you had a good run. From your origins in '60s counterculture to your recent revival in a style landscape that's favored Deadhead aesthetics and an embrace of the outdoors, you have served us well. You could survive the appropriation that naturally sprouts from going mainstream, the one that saw you worn by tedious influencers and hypebeasts whose idea of going outside is waiting in line outside of a store. What you can not, will not, live past is the co-opting of Joe Biden, author of the '94 Crime Bill, and Kamala Harris, a cop.

The Democratic presidential nominee has unveiled a new collection of merch designed by a crop of proper fashion designers. Included in the mix is tie-dye T-shirt from Joe Perez, the former Donda designer who helped make the Blackletter font ubiquitous in streetwear with Kanye West's The Life of Pablo merch.

Perez's Biden design is noticeably similar to those of Online Ceramics, which has parlayed cues from bootleg Deadhead merch into official The Grateful Dead collaborations and other apparel that calls for taking care of the earth, enjoying nature, and living a healthy lifestyle. To see this visual disposition adopted by a candidate that's only appealing as an alternative to Donald Trump — who supports fracking and increased spending on police while standing against Medicare for all — feels gross. Or to put it more bluntly, like a total bastardization of the whole ethos that's preceded it.

A different breed of co-opting — The Blackletter family of fonts that inspired by the TLOP was already favored by Mexican communities and had been used by the Los Angeles streetwear brand Born x Raised. This spurred some mild criticism of copying for the merch that reportedly garnered West $1 million in just two days of sales, but it's mild compared to what's going on with Perez and Biden.

Consider the list of issues on the back of Perez's T-shirt. The very first one is the "climate crisis," but how serious can you consider Biden's commitment to addressing it when he won't support a ban on fracking and the havoc it wreaks on both the land and the people living on it. How deep will he "stand up to strongmen?" when he echoes in the same side-railing that was used against Martin Luther King Jr. by repeatedly focusing his ire on looting and rioting? What good is his upholding of "universal human rights" when he won't denounce Israeli occupation of Palestine? These basic progressive buzzwords might work for another candidate, but for Biden they ring hallow.

It was just this morning that I was looking at Biden's campaign merch, which was among the most swagless during the primary, and lamenting over how weak it is. Little did I know that, within a few hours, his campaign would be rolling out a range of apparel trying to appeal to a more fashionable set with additional designs coming from Joseph Altuzarra and Vera Wang, among others.

The truth is that there probably isn't a design hot enough to make me want to rep Biden with my chest. My enthusiasm for him can't rise above casting a vote for him as a necessary act of settling for marginal progress. My preferred candidate is Bernie Sanders, and it's no coincidence that a range of legitimately dope merch arose from supporters who didn't need to officially partner with his campaign to show their devotion through T-shirts.

The strings are too visible — The very same DIY aesthetic was visible in unofficial Bernie tees from Come Tees, Cactus Store, Bern Your Face, and other smaller brands. And it was fitting. Here were fledging creatives applying the design language of a seminal counterculture to a legitimately progressive candidate. They were eager to raise money for Bernie and did it on their own, donating the proceeds directly to Sanders' campaign.

Those T-shirts stand in sharp contrast to one commissioned by the Biden campaign. There's an enormous difference between creating something out of your own volition and being guided by the powerful arms of a presidential campaign. One act spells passion, while the other is an act of endorsement that falls short of the same fervor — especially if money was exchanged. A disbursement from Biden to Perez doesn't appear in current FEC filings, and Input has reached out for comment to see if Perez was compensated for his work.

Whatever led to this union has nothing to do with the spirit of tie-dye. It's an overt attempt by Biden to become more hip, but he's better off hawking aviators. Biden has a long history with the sunglass sillhouette, but we can't say the same about the pattern born from a movement that dreamed much bigger than Biden ever has.