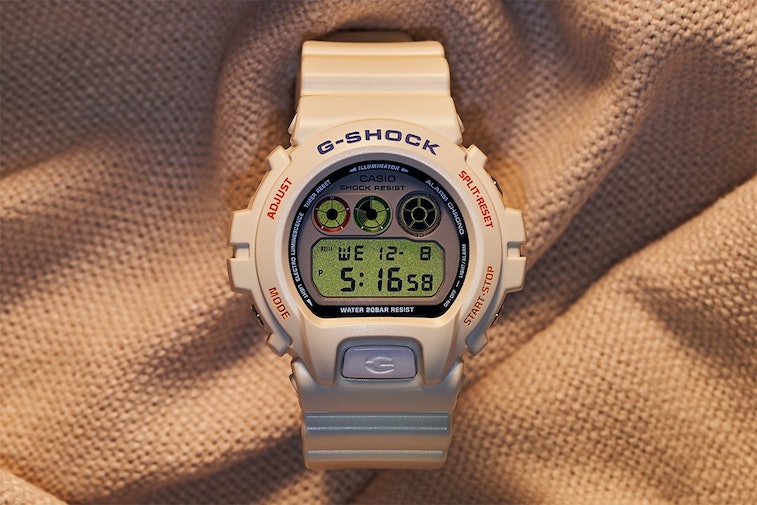 In case you didn’t know, John Mayer is the king of horology. The singer joined forces with Casio and watch blog Hodinkee to present a second ‘80s inspired G-SHOCK watch that isn’t just a retro-lovers dream. This isn’t the first collab between the trio since they actually created a similar concept a year ago in gray.

Blast from the past — This year’s DW6900-PT80 timepiece takes its cues directly from the original Casio PT-80 keyboard — which originated in the ‘80s of course — with red, green, and gray registers on the “Triple Graph” display. An off-white color, similar to the ivory keys on a piano, covers the rest of the resin case and strap.

The watch comes in at 53.2mm in diameter and 16.3mm thick for a slightly clunky wardrobe addition. A stopwatch, timer, alarm, flash alert, and afterglow backlight round out more of its special features, but if you’re looking for that fitness tracker, you won’t find it here. Though Mayer had a heavy hand in the watch’s design and inspiration, the only place his name is found is on the case back and packaging.

It’s worth noting that by the time of posting, the three-way collab sold out between one and two minutes, according to Hypebeast, and popped up on eBay shortly after. The resell spike begs the question of if anything is sacred anymore as listings for the originally $180 watch hit the e-marketplace between $328 and $750.

His wrist is a wonderland — John Mayer is a jack of all trades. The crooner released an ‘80s-esque album, Sob Rock, earlier this year, and tapped into the decade “that brought us big hair, acid wash jeans, and the ‘Super Bowl Shuffle,” according to the press release, to bring the G-SHOCK to life.

To put it lightly, John Mayer knows how to dress (his wrists). His collection is evergreen, catching the attention of clock connoisseurs and admirers everywhere. What sets him apart from other big-time collectors, say, Jay-Z and Sylvester Stallone, is his ability to appreciate the timelessness of an everyday piece, regardless of the label. To Mayer, the latest Casio installment is just his way of displaying the best of the ‘80s.

Those who want to get on John Mayer’s watch level can turn to the reseller gods for a chance at redemption. Who knows, maybe this will be an annual release and span across all of Mayer’s childhood keyboards, but only time will tell.

More like this
Maya Ernest
6 minutes ago
Rebooting
How old tech like iPods have become hot fashion accessories
Andrea Carrillo
36 minutes ago
Style
BAIT and Columbia are casting a line on your next fishing trip
Maya Ernest
6.21.2022 6:30 PM
Style
Tag Heuer’s smartwatches let you flaunt your NFTs on your wrist