“Thank you Adidas for trusting me and believing in my ideas and pushing them to become even better. This is a dream for me to start the journey of creating with a team I respect and love.” 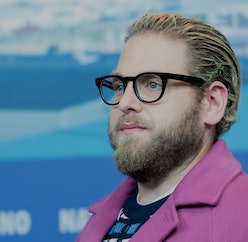 Jonah Hill can do it all. He's an acclaimed actor, writer and film director, and soon he'll also be a sportswear designer. The rumors were true: Hill has confirmed that he is, officially, working on a collaboration with Adidas. While Hill didn't say what his Three Stripes capsule might look like, leaks suggest limited-edition Samba and Superstar sneakers will be a part of it. Considering how he's often spotted in the streets of New York City wearing Sambas, and how he's said that's one of his favorite Adidas models, that he would be working on his own models of the classic silhouette shouldn't come as a surprise.

We'll know more in the near future — "Thank you Adidas for trusting me and believing in my ideas and pushing them to become even better," Hill said on an Instagram post. "This is a dream for me to start the journey of creating with a team I respect and love. Thrilled to show you all what we’ve been working on. More coming very soon."

Those of you who are interested in staying up to date on the collab can go to Adidas' site, where you can enter your email and be one of the first to know when the drop is happening.

Jonah Hype — In recent years, Hill has become known as a "Drip God" among hypebeasts, thanks to his subtle, raw streetwear style — which, as mentioned earlier, more often than not include him rockin' a pair of Adidas sneakers. Just take a quick glance at the Instagram account Jonah Hill Outfits to get a sense of how far off his fashion level we all are.

Last year, the German brand tapped Hill to tease its then-new Lxcon lifestyle shoes, though that wasn't an official collaboration. With their upcoming collection, you can fully expect Hill to put his own spin on some of his favorite Adidas models and potentially clothing, too.

We'll see how it compares to Beyoncé's work with Adidas.