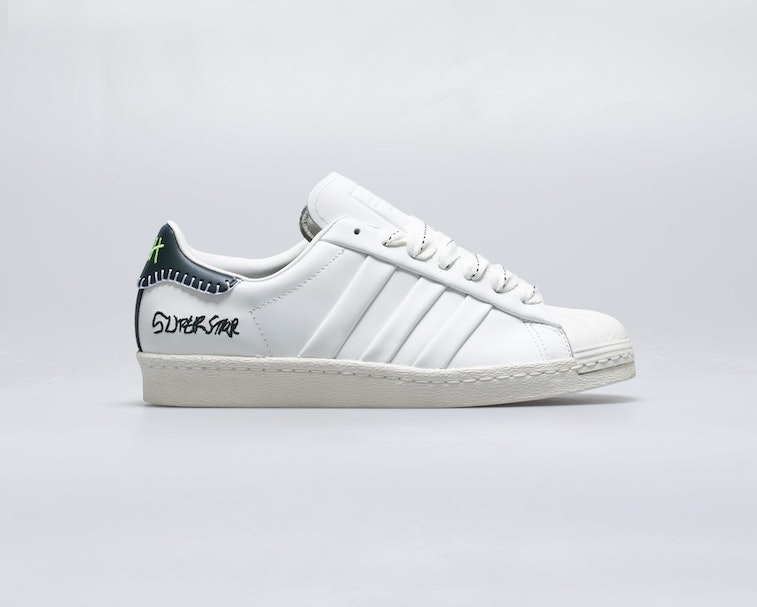 Jonah Hill's partnership with Adidas has produced a campaign, a career day in Chicago — and now, finally, a tangible sneaker that's actually being released. The curtains have been pulled back on Hill's first collaborative sneaker, designed by the actor and filmmaker himself.

If, like me, you were a little disappointed when you heard he'd be working on a Superstar, you may be pleasantly surprised by the result.

A proper unit — Hill's Superstar puffs out like a skate shoe, an appropriate development for the man who made his writing and directorial debut in a film about '90s skater kids. The shoe's signature three stripes, as well as the eyestay, are done up with a stitch and turn construction that creates high contrast and immediately sets apart his collaboration on the iconic silhouette.

A graffiti-like "Superstar" on the heel counter and "JH" initialing on the mustache are both embroidered, helping to create a premium feel. The whole thing is white and cream, with the exception of the graphics and the mustache, which sees a black stripe extend down to the midsole. "JH" is stitched in neon green, the detail where you can say, to borrow Hill's parlance, he "freaked it."

Working with the homies — The sneaker is a natural extension of Hill's emergence as an everyman's streetwear gawd. He's become a style icon by wearing clothing that's largely attainable and putting in just enough of his own spin, as best exemplified by the time he tucked a basketball jersey into a pair of trousers. Even more endearing is his devotion to only wearing gear from "the homies," a level of friends supporting friends we should all aspire to, even if you don't share the same passion for dressing.

The Adidas collaboration arrives after years of Hill rocking their shoes, providing further justification for a sneaker release that may be surprising. If musicians can have their own shoes, why not actors, too?

"All I know is anything I direct or act in or wear reflects a version that’s getting closer to who I genuinely am," Hill told Esquire. "I think life is a big journey to get to who you genuinely are."

The JHill 1's are coming July 11 — Hill's Adidas Superstars are slated to release July 11 at select retailers for a palatable $130. He's not the type for an exorbitantly priced shoe, and his first delivery looks like it should be more expensive than its price tag.

Call that a real homie move.