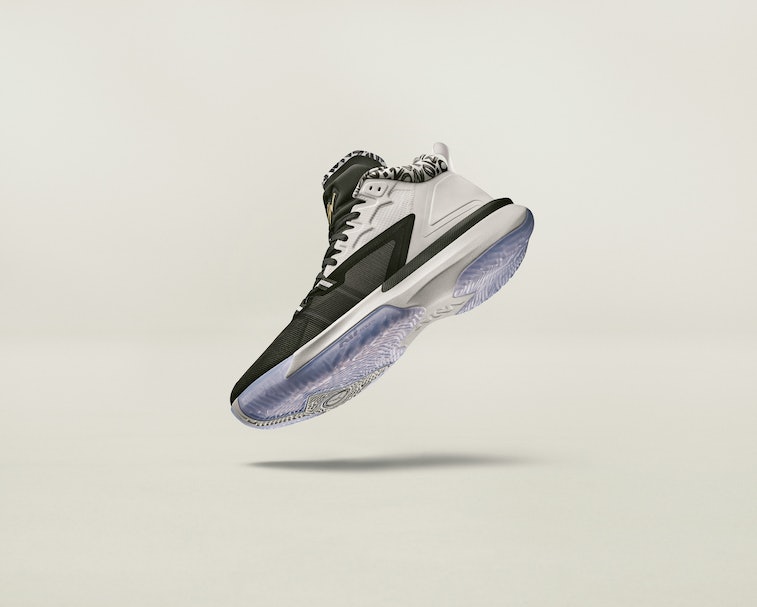 While leaks have tempered the element of surprise, Zion Williamson’s first signature sneaker has officially arrived. Jordan Brand has unveiled the Zion 1, a basketball shoe tailored to the unprecedented combination of size and explosiveness in Williamson’s game.

The sneaker’s design emphasis is on the tongue, an unusual element to focus on — but then again there’s nothing usual about Zion. It's flexible and articulated with targeted padding and dedicated stitching patterns to reduce pressure from the laces and provide a snug fit. Jordan says the tongue is inspired by superhero armor, providing protection, breathability, and freedom of movement simultaneously.

Williamson’s desire for a superhero-influenced sneaker also led to the “Z” pattern that splits the upper into two distinct parts. “When we thought about an icon or symbol that could clearly draw out the shoe’s benefits, the ‘Z’ made perfect since to us,” Vianney de Montgolfier, senior footwear designer for Jordan Sport, said in a release. “It’s the letter for speed, it has the base for power, and it’s maybe the most distinguishable letter in the alphabet. There’s nothing like it.”

What else is the Zion 1 packing? — The most famous, or infamous, sneaker moment involving Williamson to date is when he stepped all the way through a pair of Nike PG 2.5s during a college game — making the technical elements of his own shoe particularly intriguing.

The Zion 1’s forefoot is contained by an internal two-loop strap, which sits above a cushioning combination Nike is using for the first time. A full-length Air Strobel is complemented by a stacked and bottom-loaded Zoom Air Unit. The entire shoe’s base, meanwhile, has an extended construction for extra stability and is inspired by the “massive” tires on Williamson’s own truck.

Four versions are already on the way — Those in New Orleans, where Williamson plays for the Pelicans, will get the first chance to buy the Zion 1. A black and white color scheme is on sale today at the Nike Community Store in the city, with a wider release coming Friday, April 23. Williamson says the seemingly plain makeup is important to him, as it represents his home base.

“Growing up, I was taught that your home base is your foundation,” Williamson said in a press release. “Whether it's your family or your brothers, you need a solid base to start from, and that's what the white and black colorway represents for me. If you can master the simple things, your potential is limitless.”

Three more variants will then follow, beginning with a purple, red, and blue “ZNA” version on May 5. The ‘90s-inspired color explosion initially leaked releases May 19, followed by pink, maroon, and white sneaker that represents Williamsons’ home town of Marion, North Carolina.

Now, we just wait to see how much the Zion 1 will cost. And year's worth of successors are all but guaranteed.