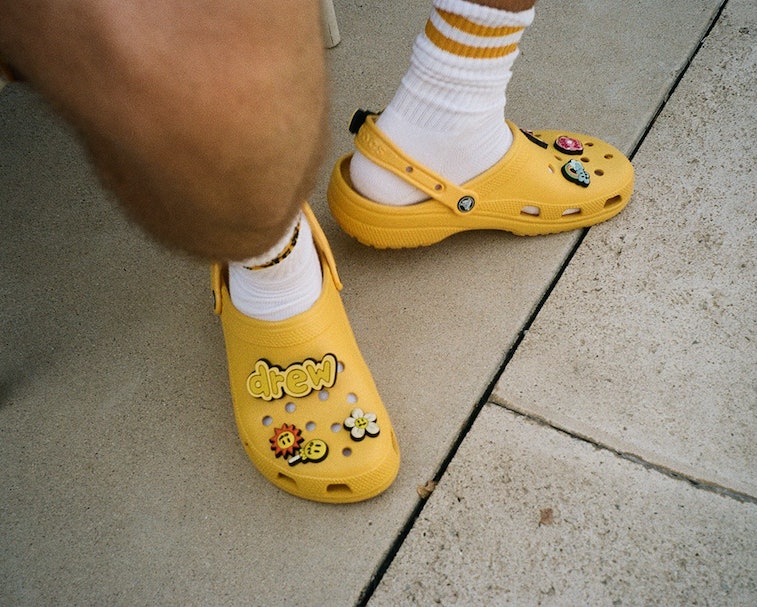 We've been following Crocs as a rising force in footwear trends this year, and now marks the point where we can't imagine them getting any bigger. Justin Bieber is getting his own collaboration, putting the rubber clogs in front of his 148 million impressionable Instagram followers. However many Crocs you've seen on feet this year, it should be nothing compared to what the Bieber effect will do for their ubiquity.

The Crocs themselves are hardly noteworthy, Bieber's name aside. It's just a plain yellow clog being sold with a bunch of Jibbitz taking on motifs from Bieber's own struggle streetwear brand, Drew House. Smileys, flowers, a teddy bear, donut, slice of pizza, and a whopping "drew" charm can be tacked on at your discretion. Never mind that half of the iconography is ripped off from other, more appealing brands. The Biebs is here to trend hop and plunder, and his fanbase will be none the wiser.

At least it's cheap? — One of the most endearing things about Crocs becoming surprisingly popular is how cheap they are. While the sneaker game and its resale market are out of control, Crocs collabs have been retailing for around $60, only $10 more than the normal retail price. Provided you missed out on the initial release, copping your desired Crocs from resellers still isn't too bad — the coveted Chinatown Market x The Grateful Dead Crocs are going for around $135 on platforms like StockX.

Bieber's Crocs, which will release through the brand's website and his own, will likewise be just $55. It's a more than reasonable demand from consumers, particularly when considering his younger fanbase.

Other artists love Crocs, too — Post Malone was early on the trend with his 2019 Crocs release, and Bad Bunny just released his own glow-in-the-dark pair in late September. It makes sense for musicians, too — what could be better to wear backstage than a pair of comfortable and rubbery clogs that slip right on and off? (Not that they'll be touring anytime soon).

If you haven't already, give yourself over to the once groan-worthy shoe that's become a cozy fav. And because it's 2020, Crocs are now cake as well.