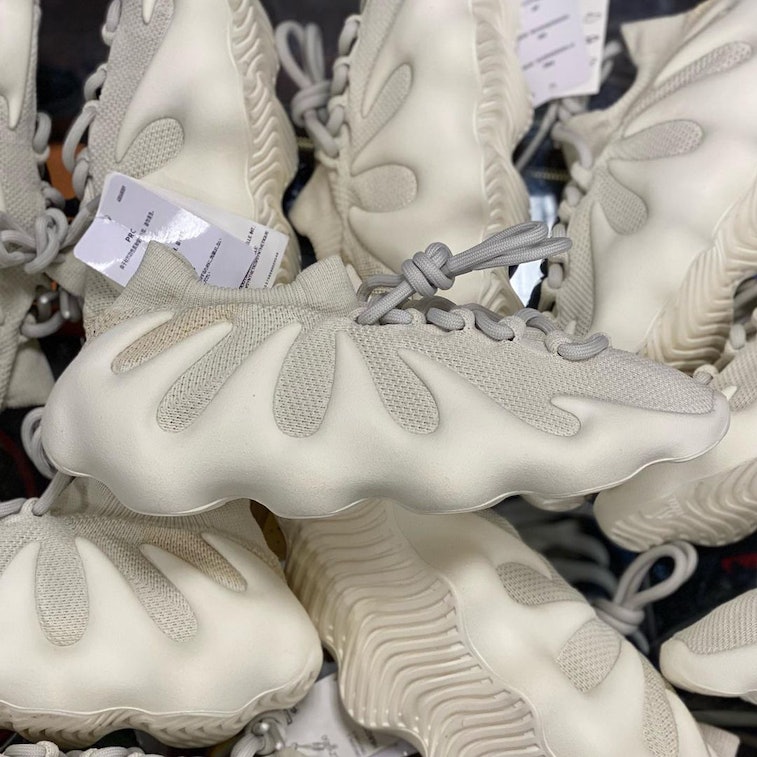 Images of the Adidas Yeezy 450 have been transmitting across the internet for ages, and we wouldn't have been surprised if the shoe never saw a release. Previously known as the 451, the knit sneaker with an exoskeleton of sorts is the wildest sneaker Kanye West has cooked up yet. Sneakerheads have compared the silhouette to pork buns, crabs, and the namesake creature from the Alien franchise.

Now, we'll see if the jokes persist as the Yeezy 450 has been confirmed for release. A source close to the two brands confirmed to Input that the sneaker is indeed coming out and will not be exclusive to Yeezy Supply, as previously reported. The source did not divulge a release date, but did say that the shoe will be "very limited."

Ovrnundr, an Instagram account the specializes in leaks, has reported March 6 as the official launch date for the Yeezy 450. The retail price is said to be $200, which may come as a surprise given its unique construction, and even more unusual is that the sneaker has reportedly been manufactured in Germany.

The 450 looks largely the same as it did a year ago — The Yeezy 450 took on numerous appearances during its concept phase, but the version set to release only appears to have few deviations from the cream and bone pair West wore last March in Paris.

Unfortunately, the best look yet has come from A$AP Bari, whose sexual assault conviction hasn't removed him from the industry and its perks. The designer was seeded an early pair of the Yeezy 450, and a video he posted shows the outsole that climbs up and grips the rest of the shoe has only seen its shape altered slightly. Perhaps most relieving is that the entry point for the knit upper now appears structurally intact and not as flaccid as it did in earlier leaks.

The laces may also be made of a different material and not quite as matchy as they were before. But besides that, the 450 is exactly what we've seen before — coming as good news for those who loved it and all its bizarreness and as motivation to keep popping off for those who hated it. For me, it's more of a mixed bag because, while I love this freak show, I can't suddenly forget what a colossal piece of shit West has been over the past five years.

Even if the Yeezy 450 does release as soon as March 6, don't expect the debate over it to die down any as quickly.