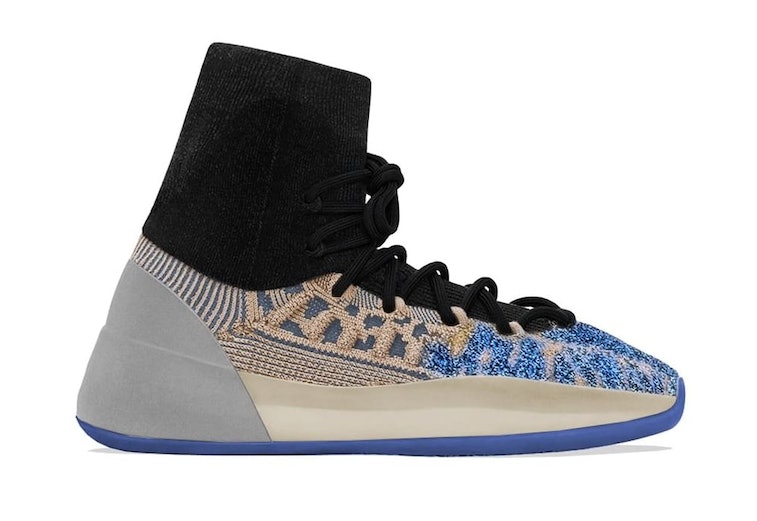 The timing of the release certainly isn’t a coincidence: Kanye has attempted to get his shoes on the court for years, first partnering with NBA player Derrick Rose and later designing Yeezy’s first-ever basketball sneaker, the Quantum Basketball. Yet there’s been no word on the former, and the latter was widely snubbed by athletes and hypebeasts alike due to its strange yet supportive hard shell cage. Pairs of the Quantum Basketball sneaker can still be found online for well under their $250 retail price — and only a few months after its debut, it seems the same is true for the BSKTBL Knit. The $300 shoe is now reselling for as little as $182, meaning its surrounding hype (or rather, lack of it) isn’t enough of a selling point.

Steppin’ courtside — Still, it’s worth arguing that the BSKTBL Knit is Yeezy’s best-looking shoe geared towards performance. The footwear combines the reinforced ankle of the Quantum with the knit upper of the hyped Yeezy 350 v2 sneaker, making for an overall sleek look. On the upcoming model, a blue “Slate Azure” shade hits decorate the toe and outsole, while a light tan takes over the rest of the mixed knit upper.

Signature details like a black elongated ankle collar, matching black laces, and reflective heel caps — all seen on the initial design — finish off the upper. Underneath, Adidas Boost cushioning lines the midsole to support those actually shooting hoops in the knit kicks.

Don’t ball out on this one — If you’re looking to try out Kanye’s sports sneakers for yourself, chances are you’ll be able to secure the BSKTBL Knit with ease. As shown with the Quantum, hypebeasts (and subsequent resellers) aren’t necessarily looking for a performance sneaker, meaning its release won’t be as crowded as those for the Yeezy Slide or Foam Runner.

It’s also worth noting that the BSKTBL Knit retails for much more than the typical Yeezy slipper: Adidas has its latest basketball model priced at $260, which is still a markdown from its last $300 price tag — perhaps a sign the shoes aren’t selling as well as the brand hoped. Still, those who are buying the sneaker in the first place probably aren’t doing so lightly.

To add another element of exclusivity to its release, the Adidas Yeezy BSKTBL Knit sneaker is expected to receive a shock drop during NBA All-Star Weekend. A wider release is set to follow sometime in May, although you may be better off waiting for the shoe to drop on resale sites. Like its predecessor, the Slate Azure BSKTBL Knit could soon sell for much less than retail.