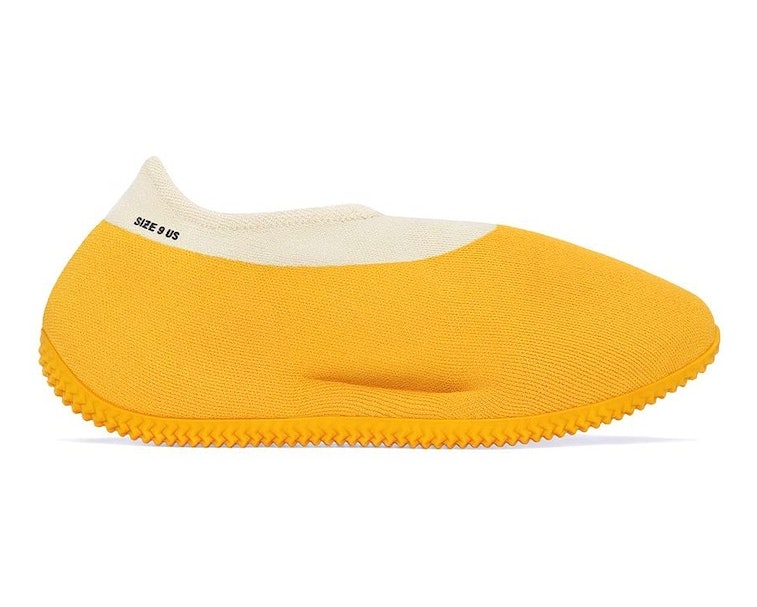 Kanye West and Adidas are continuing to challenge what exactly constitutes a sneaker with the sudden announcement of the Knit Runner. Images of the slipper-like silhouette first surfaced in June, and today Adidas has announced the shoe’s release just a day ahead of time.

Stylized as the “YZY KNIT RNR” in Yeezy parlance — why the “I” remains, who can say? — West’s latest oddball sees an upper consisting of a single knit panel. A “Sulphur” yellow consumes the majority of the bulbous shape with a slight indent at midfoot, while the cream ankle is printed with each shoe’s respective size. Down low is a single thin sole unit with wavy tread, keeping construction simple and not unlike a moccasin.

The first iteration of the Knit Runner will launch at 8 a.m. ET Thursday, September 23, exclusively through Yeezy Supply. Pricing has yet to be announced, but, despite the extreme initial reactions, we can expect this strange new model to sell out promptly no matter the cost.

How weird is too weird? — While there isn’t a single Yeezy shoe that could be described as “conventional,” a few models have risen above the rest and proven quite polarizing. The leading candidate for the most bizarre Yeezy model yet would have to be the 451, a loosely knit sneaker held up by rubber scaffolding that’s drawn comparisons to pork buns and the chestburster from Alien.

In contrast, the Knit Runner shows that you don’t need to go extreme to let your freak flag fly. The question is who really wants to wear what looks like shoes given to patients in a Yeezy hospital, and how well will it stand up to wear in the outside world? The Knit Runner’s best application may be as a house shoe, but can it top the Yeezy Slides and Foam Runners that have become two of the most sought-after silhouettes around?

It’s hard to say why exactly the Knit Runner exists besides the fact that it can. West can do just about anything he wants and be heralded as a disruptor by his most sycophantic of fans, but at least the stakes are low for a weird slipper.