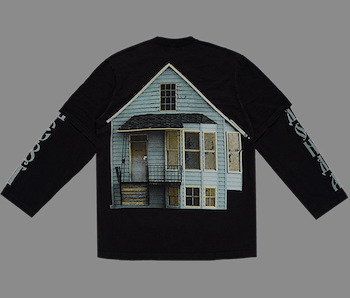 Kanye West has finally released Donda, even if his label had to do it for him, and along with the long awaited album comes the obligatory merch. The guaranteed cash cow has been “engineered by Balenciaga,” continuing West’s relationship with Demna Gvasalia after the the luxury house’s steward was named creative director for one of the Donda listening parties.

Two conclusions are to be made from the new collection, and you may want to look away from both — we’re going to see too many people wearing masks that shroud their entire head like Kanye, and West is doing his part to bring back the two-in-one short- and long-sleeve shirt combination. Thanks to the latter, West’s rabid audience may be unwittingly taking part in the 2000s emo revival.

All the shirts and accessories are black, but as assuredly as fans are to gobble them up, one must admit that the Donda merch is rather dull relative to albums prior. One of the shirts makes reference to a potential second presidential run in 2024, which should be an exasperating thought to anyone not still drinking the rapper’s Kool-Aid.

Kanye past and future — West’s childhood home, which was reconstructed in the center of Chicago’s Soldier Field last week, is printed on the front of one shirt, and on the rear is a baby photo of Kanye’s mother, the album’s namesake. The second and only other shirt looks ahead to 2024 with the year printed along with a cross on the rear, while the presidential seal appears up front. For the accessories, West has released a simple black ball cap with Donda printed at the edge of the brim as well as a mask for fans to their try best Yeezy gimp impression.

With Balenciaga engineering comes near-Balenciaga prices — the hat will cost you $60, the mask $160, and each of the shirts $200. The items are also being sold through Kanye’s website as pre-orders, and shipping isn’t slated to begin for three to four months. By the time the merch arrives, West could very well release a different version of Donda, but we’ll still be a long way from being spared presidential talk.