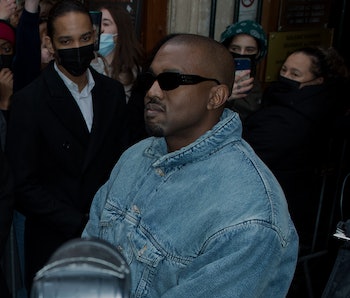 Kanye West would stand to make oodles of money if he decided to start selling NFTs, but the artist now known as Ye has made an announcement making it clear that he is not interested in the metaverse.

West took to Instagram to post a hand-written note instructing others to “not ask me to do a fucking NFT.” According to him, Ye’s focus is on “building real products in the real world” — namely food, shelter, and clothes. The door has not been entirely shut on NFTs, however, as he ended the note with “ask me later.”

Rappers of West’s ilk, of which there are very few, have yet to mint their own NFTs despite what would seem to be an easy and lucrative payday. Last month, Torey Lanez urged Drake to release his own non-fungible tokens and suggested that he could make $50 million.

West is a busy man — Worth a reported $6.6 billion, West has plenty of projects to occupy his time. There’s his Adidas Yeezy line, of course, and sources suggest that he’s behind schedule in his partnership with Gap.

Since launching last summer, Yeezy Gap has only produced a small assortment of hoodies and jackets, with West having final say over releases. He’s reportedly been hung up on the quality of his very real-world products, and Gap has sought to speed things up by having its support teams follow him from Wyoming to Atlanta and Chicago.

Going off of his note, West has long been working on providing shelters to the homeless. Dome prototypes built on his Calabasas, California property were ordered to be torn down by the city in 2019, though, and West has yet to show any signs of bringing his plans to light. As far as food goes, Ye did visit a humanitarian farm last fall, but we have no idea what else he might have in store.

Regardless of what NFTs’ most ardent believers might say, it seems West has more pertinent world-building on his plate. Besides, what’s $50 million when you’re worth nearly $7 billion?