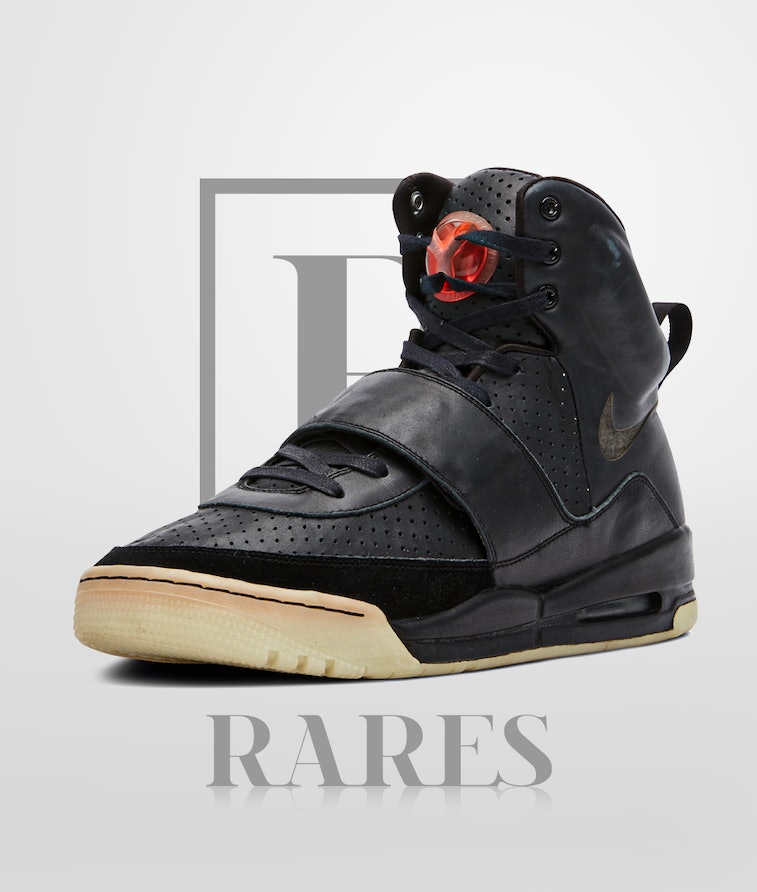 The world’s most expensive sneaker ever sold at auction can be sourced back to an Instagram DM slide. Brahm Wachter, who leads Sotheby’s sneaker sales, reached out in 2020 to Gerome Sapp, a former NFL player who was then in the development stage for his sneaker investment platform Rares.

After the two men developed a friendship over several months, Sotheby’s was chosen to facilitate the sale of a rare Nike Air Yeezy sample worn by Kanye West at the 2008 Grammys. It was then that their relationship became professional, as Wachter suggested that Sapp purchase the one-of-one sneaker. After some haggling — Sapp said his initial bid was for just $50 — a deal was reached for Rares to purchase the first Air Yeezy ever seen by the world for a price of $1.8 million.

The record acquisition would become the launch strategy for Rares, a platform that allows users to invest in sneakers just like they would stocks. In a sense, anyone could become a part-owner of the Air Yeezy sample and could profit off of the shoe through either secondary trading or when the sneaker is eventually sold to another buyer.

Sapp sees Rares as a way to get sneakerheads into investing by trading in something already familiar to them. The treatment of sneakers as a commodity is by no means new, as the resale market is predicted to reach $30 billion by 2030. StockX, which facilitates peer-to-peer sales for sneakers and streetwear amongst a growing list of collectibles, has been called the “Nasdaq of sneakers” and is now valued at $3.8 billion.

Another website called Otis has already made the stock market comparison more literal by allowing users to obtain fractional ownership of coveted sneakers and other collectibles items. What sets Rares apart, though, is that it’s the first such platform to receive qualification from the U.S. Security and Exchange Commission — which means it’s regulated in the very same way as the stock market.

“You’re actually investing in real securities,” Sapp told Input in an interview. “For a lot of people, this is their first investment. It’s a gateway into bigger investments and multiple types of investments. The old adage of ‘invest in what you know’ — we take that to the next level with sneakers.”

“We’ll always dabble in the rare vintage world because I’m an old-school sneakerhead.”

As of now, Rares has offered only a few IPOs for a few one-of-a-kind sneakers worth more than your day-to-day “hyped” releases. The 2,000 shares for Jay-Z’s Air Force 1 collaboration in 2010, made to commemorate the first FIBA World Basketball Festival in 2010, sold out at $13 each, which sets the initial value of the shoe at $26,000. Investors can currently buy shares for a rare Air Jordan 1 “Chicago” sample with a black sole produced in 1985 and currently valued at $40,000. Then there’s a niche Apple sneaker from the ‘90s (yes, that Apple) valued at $18,000.

The Air Yeezy sample has yet to go live since Rares launched and announced it had acquired it in April. Investing in that sneaker or one of the other pairs Rare has purchased is more of a long term investment, but Sapp says the platform will eventually expand to include contemporary hyped releases — such as the recently released Off-White x Nike Dunk “The 50” collection — as an equivalent of day trading.

“We’ll always dabble in the rare vintage world because I’m an old-school sneakerhead,” Sapp says. “That’s where my heart is, and that’s where the industry started. But as a finance guy, I also want to offer a solution to get in and out of the height of appreciation [for more hyped drops] and move onto the next one.”

Rares acquisition of the Air Yeezy sample was part of a personal triumph for Sapp, who says he remembers seeing West wear them in 2008 and immediately knowing it would be a landmark sneaker. Sapp had just retired from the NFL and was inspired to see a musician given the opportunity to design a sneaker for Nike, which had never been done before. He now owns every variant of the Air Yeezy that Nike released publicly, while he, like Kanye, has strayed from his original profession.

“Don’t look at this as a sneaker that just happened to sell for $1.8 million. Look at it as a piece of artwork.”

Scrupulous investors may see the record price paid for the Air Yeezy, more than three times as much as the previous record-holder, and be concerned that the market has been artificially inflated. Will the rare Nike sample really find a buyer who will pay more than $1.8 million, or is the only way to make money off the investment through trading of its stocks? Sapp is confident that the sneaker will one day find another buyer, and the plan is for Rares to hold onto such securities for up to several years if necessary.

“Don’t look at this as a sneaker that just happened to sell for $1.8 million. Look at it as a piece of artwork,” Sapp says. “If we went to the Louvre and I pointed out the Mona Lisa and said it was worth whatever millions of dollars, you wouldn’t question that. We believe that sneaker has value just like artwork has value, and we believe there will be a lot of secondary trading before the sneaker reaches its maximum valuation.”

Rares will also maintain an ownership stake in each of the sneakers it makes available for investment, and Sapp hopes investors see this as a sign that the company is confident that it will eventually be able to sell them for a profit. Few people in the world could outright purchase such an item, but treating them as securities allows anyone to claim an ownership stake with much more palatable share prices.

When Rares expands into sneakers that’ll be offloaded quicker, it will also remove the barrier to entry for acquiring short-term investments. Whenever a prospective customer seeks to purchase a coveted sneaker, they know they’ll be competing against resellers armed with bots to game the odds in their favor. But by investing with Rares, they won’t have to worry about if they can even get their hands on the shoe — not to mention that they won’t have to deal with the actual handling of said product. The focus on investing is made even more clear than by, say, StockX, and owning something to wear is entirely irrelevant.

From both the source of origin and in the resale market, a sort of gentrification has shut out the very community that originally made sneakers so valuable. Shoes like an Air Jordan 1 became an affordable luxury because of Michael’s illustrious career and the predominantly Black culture that coveted whatever he wore, but now his sneakers to are as much to acquire for wear as to profit from.

And although Rares cannot do anything about getting sneakers back in the hands of the people who originally held them in such high acclaim, it hopes to get them back involved by allowing them to profit with a low barrier to entry. Rares may even bring in a new wave of security traders as a love of sneakers graduates to other assets. What it won’t do, however, is help put shoes in the hands of people who want to wear them. If the game is all about money now, the most we can relish is some different players becoming involved.