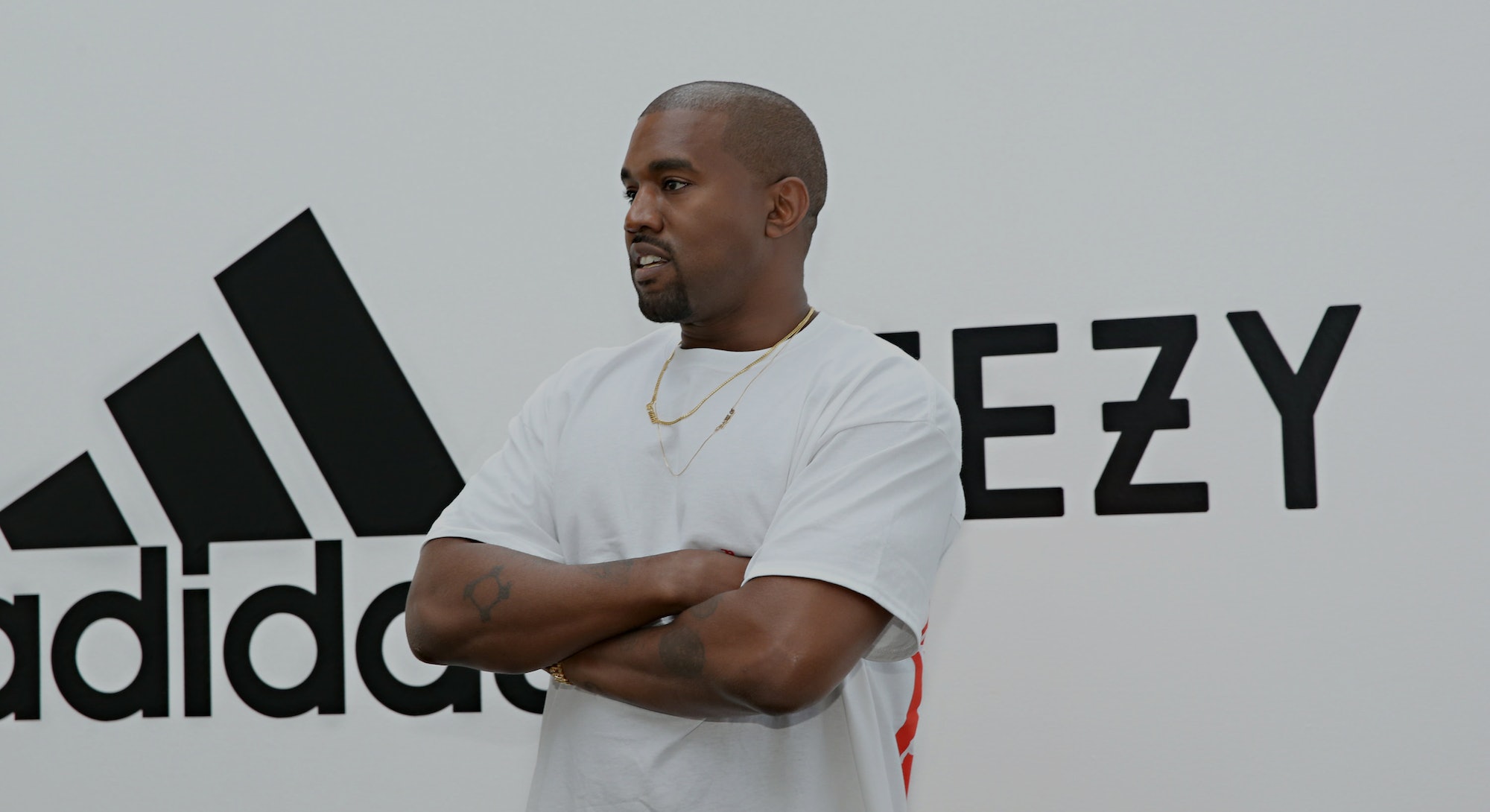 If you buy the math, Kanye West has become a billionaire thanks largely to his partnership with Adidas, which officially began in 2016.

Forbes signed off on the appraisal earlier this year and estimated that his brand, Yeezy, brought in $1.3 billion from shoes in 2019, with $140 million in royalties going into West's pockets. The magazine estimates his total net worth at $1.3 billion, a sum that should surely be enough to make anyone forget all about Air Jordans. But this is Kanye West we're talking about, and his script is never what you might imagine.

Despite the money lining his pockets with The Three Stripes, West admitted in an interview with Nick Cannon that he still wishes he could wear Air Jordans. “In my Adidas contract, [I] definitely should be able to wear Jordans,” West said. “Jordans need to be part of reparations. You can’t tell a Black man not to wear Jordans. It should be in any deal. And also, you can wear your friend’s clothes.”

West’s recent comments underscore the fact that, for whatever progress Adidas has made, Nike is still the clearcut leader in sneakers. The shoes Michael Jordan wore throughout his career have a cache that’ll never be matched, and Nike continues to innovate in technology and aesthetics at a rate the rest of the industry can’t keep up with. West may be Adidas’ prime signee, but it’s still not enough to keep him from gazing at the other side of the fence, directly at the German brand's arch-rival.

Among West’s friends are Virgil Abloh, who’s made some of the most sought after sneakers in the world since beginning to work with Nike in 2017. One of those shoes, the Off-White x Nike Presto, appeared in an image of West’s sneaker closet that he shared on Twitter in 2018 — suggesting that the appeal was too great to resist, even if he’d largely kept it under wraps to avoid violating his contract.

Terry Rozier, a basketball player once signed to Adidas, had his deal terminated in 2018 for wearing a pair of Nikes during shoot-around before a game. West is clearly a bigger asset for Adidas than Rozier, but that would only make West supporting a competitor all the more damaging. And yet his flirtation with Nike has persisted this summer.

Prior to the Cannon interview, West praised Nike’s futuristic ISPA Road Warrior sneaker in a series of tweets. “WOW SO COOL NIKE … KEEP INNOVATING … THE WOLRD [sic] NEEDS IT … GREAT JOB,” he tweeted along with a photo, presumably of him, holding the sneakers. “THESE BRING ME BACK TO MY CHILDHOOD … GROWING UP ON ANIME … I NEED A PAIR.”

The Road Warrior looks like a bionic foot, a sneaker coming from the cinematic worlds of Mad Max or Blade Runner into our very own. Two Zoom units are stacked on top of each other at the middle of the foot, and a gap underneath the heel provides some of the same springiness from the Shox series. Instead of laces, a zip tie-like fastening only adds to its radical aesthetic. While still extremely limited, there’s no other sneaker that’s taken such a bold surge into the future this year.

Adidas, which declined to comment for this story, made an industry-leading breakthrough with the introduction of Boost technology early on in the last decade. The foam cushioning offered levels of comfort never felt before while returning 20 percent more energy than the EVA rubber commonly used for sneaker soles. Made up of hundreds of fused “energy capsules,” the cushioning debuted on the Energy Boost in 2013, but it’s real impact began with the Ultra Boost in 2015.

West was a trailblazer for pairing Jordans with luxury apparel

The Ultra Boost’s fusion of performance and style made it a hit for both running and everyday wear. That latter category would be captured further with the Adidas NMD, an outright lifestyle sneaker, as well as the concurrent arrival of West from Nike.

For Adidas, signing West a few years ago was a major coupe, as it gave the brand the street credibility it so desperately wanted and, most importantly, needed. Still, Nike's Air Yeezy and Air Yeezy 2 endure today as some of the most beloved sneakers of all time, and from the jump their popularity seemed to suggest a long and profitable partnership with Nike. But Nike refused to pay West royalties, a perk that at the time the company reserved for athletes only.

Collaborating with a public figure who didn’t play sports was something of an anomaly at the time. So too was working with high fashion designers, although Adidas first opened the doors by beginning to work with Raf Simons and Rick Owens in 2013. Adding West into the mix would help change sneaker collaborations forever. Without the trio, it’s safe to say that Nike never would have collaborated with Travis Scott (another friend of West), Off-White, or Sacai — regulars in year-end best sneaker lists in the past three years.

For all Adidas has done to usher in the current moment in sneakers, it’s failed to keep up the momentum. Nike has gobbled up the most high-profile collaborators, and even New Balance is gaining ground with the collaborations it’s released this year. Signing Noah and Sean Wotherspoon is a small step in the right direction, but neither are large enough to eat into the ground Nike has gained. Owens quietly separated from Adidas in 2017, while Simon’s collaborative line has gone stale.

What’s left for Adidas is West — who’s still selling out sneakers but has isolated many fans with his political statements — and its Boost technology, which is no longer the same trump card as it once was. Nike’s React cushioning is on-par with the comfort and propulsion of Boost, and almost every single sneaker company has now come out with their own cloud-like cushioning. Adidas is also trying to push its classic Superstar silhouette, but its vault runs nowhere near as deep as Nike’s.

When you look at West’s feet, he’s rarely wearing Adidas outside of his Yeezy line. That’s a far cry from when he was still at Nike and Jordans were a constant in his rotation. Along with fellow rappers and style icons Curtains and Theophilus London, West was a trailblazer for pairing Jordans with luxury apparel. He wore Air Jordan 1s to the Burberry’s London Fashion Week show in 2011, long before sneakers became a common sight in the luxury high fashion circuit. And when he was spotted wearing all three sneakers from the Air Max 90 “Independence Day” pack in 2013, the trio went from sitting on shelves to reselling for more than $1,000 in a (paparazzi camera) flash.

Like anyone who grew up watching Michael Jordan, and even those who didn't, you can’t blame Kanye for still wanting to wear his legendary Nike signature shoes. Models including the Air Jordan 1, Air Jordan 3, Air Jordan 4, and others that His Airness played in will forever live on as staples in any respectable sneaker collection. Neither Adidas nor any other brand can offer the same abiding resonance as an Air Jordan, and none seem as capable of determining the terms of the future either.

It may be too soon to speculate about West leaving Adidas — even with the departure of Jon Wexler, his right-hand man at Yeezy — but his vocal yearning for Nike is yet another indicator of how far Adidas has fallen behind. Even if Yeezy has jumped over Jumpman (it hasn’t), West can’t stop looking back and admiring his opponent. And, regardless of how much money he's made because of Adidas, it's clear he hasn't forgotten his true love in the world of streetwear: Nike, the one that didn't love him back.