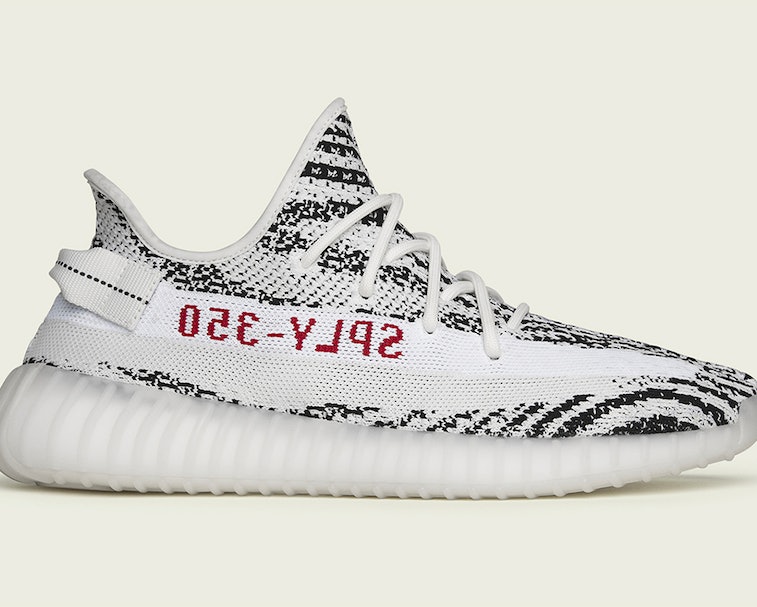 The Twitter fingers from Kanye West have struck again, and they're here to tell us all about what else... new (and old) Yeezys. The famed creative, and now lousy politician, has tweeted what he called his "$1.5 billion plan," which includes the launch of dozens of Yeezy sneakers and sandals for the rest of 2020. Along with previously unseen silhouettes, West also confirmed what has been rumored for months: the restock of two classic 350 V2 styles, the "Zebra" and "Bred." Based on the product roadmap he posted on Twitter, it looks like both of these fan-favorites will be coming back in December, although the Zebra color (which has restocked before) is going to be a EU exclusive this time around.

Where are the rest? — Sadly, the picture Kanye shared doesn't show any of the wild prototypes he's been teasing lately on Twitter, suggesting the Yeezys with Big Chewbacca Energy and the wild-looking collaboration with NBA player Derrick Rose may not be launching until 2021 — if at all. That said, the Yeezy 451, which we've previously said have the appearance of a pork bun, a crab, or an alien, is scheduled for December 2020, as well, along with a new colors of the Crocs-inspired Foam Runners and the "Quantum" basketball shoes.

For now, it looks as if Kanye and Adidas have around 20 drops prepared over the next few months, and that should be exciting for sneakerheads, especially those who are ultimate Yeezy stans.

It is what it is — It's unclear whether Adidas minds Kanye sharing their plans for the remaining of the year, or ever. But, considering how he's been publicly screaming his love for Nike and talking about how we should be allowed to wear Air Jordans despite his contract and partnership Adidas, it's clear the Three Stripes brand can't do anything to control him. That's the cost of doing business with Kanye West, though, and it would be shocking to believe that Adidas didn't know the type of chaotic relationship it was getting into when the two became official in 2016.

Still, as they say, any "press is good press" (is it?), and Kanye taking to Twitter to post an image of his Yeezy product roadmap is a rather harmless act. At the very least, it's better than him being out there meeting with Jared Kushner and plotting how they plan to mischievously get Donald Trump re-elected in November. More Yeezys, less MAGA, please.