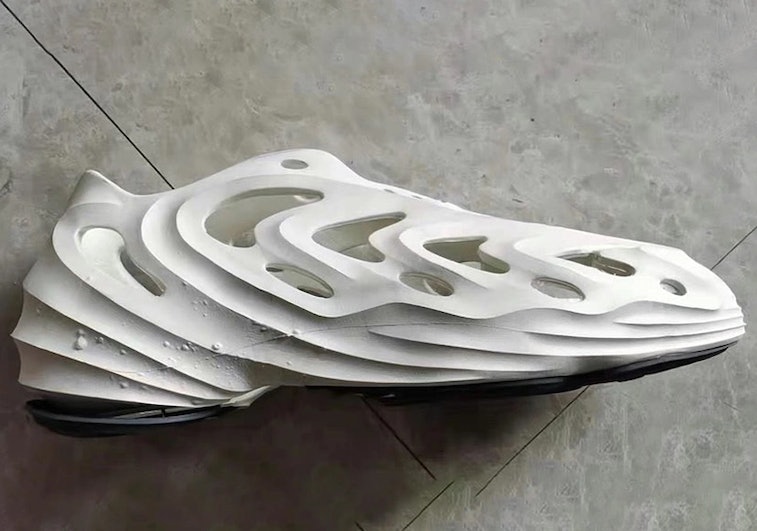 Like it or not, the overwhelming success of Yeezy’s Foam Runner clogs proves that foam shoes are here to stay — and soon enough, the brand may be introducing more athletic versions. Images leaked by Instagram account @sneakerjamz_new tease a previously unseen foam sneaker by Adidas, leading fans to speculate that the shoe is Kanye’s next big hit.

Maintaining the framework and perforations of the Foam Runner, the slip-on sneaker is built entirely from a single piece of lightweight white foam. Only an all-black rubber outsole — a feature never seen before on a Yeezy Foam model — has been added to the shoe, suggesting more performance capabilities. Yet with no laces, the footwear seems better off as a slipper than for anything fast-paced.

Unknown Foam — Like most Yeezy leaks, it’s anyone’s guess as to what this model is meant for, or whether it’ll even release. The brand has a habit of continuously updating its silhouettes — its 350 V1 and V2 sneakers are only a year apart — meaning this foam sneaker could be an upgrade of the Foam Runner, which first released in June of 2020.

Earlier this year, however, Ye gave us a look at a collaboration between Yeezy and NBA player Derrick Rose, who's also part of the Adidas family. The two debuted a set of “YZY Rose” wave-like clogs intended for the basketball court, noting (after plenty of ridicule) that the shoes were still in progress. With added traction, these foam slippers could be their updated design.

Much more sleek and sneaker-like than the Foam Runner or initial YZY Rose shoes, the new footwear sports a stacked heel and midfoot that seem to provide cushioning. Made of a single foam piece, the slip-on sneaker is chiseled and ventilated for breathability, while underfoot, the outsole offers additional arch support and rubber treads.

It’s worth noting that unlike existing Foam Runners, which come engraved with both Adidas and Yeezy branding, this foam sneaker only bears Adidas’ Trefoil logo on its outsole. While the wild design does hint at some Yeezy influence, Adidas could be making its own foam sneaker — especially as the brand is likely fed up with Kanye constantly favoring competitor Nike.

Release TBD — As Adidas and Yeezy ramp up their 2022 offerings, a release announcement for the unnamed foam sneakers should come soon. But if the minimalist clog want to compete with other athletic sneakers — especially Nike and Jordan Brand models — Adidas may have to tweak its design to include increased support and traction. A quick Yeezy branding addition, of course, would ensure the shoe sells out regardless of performance.