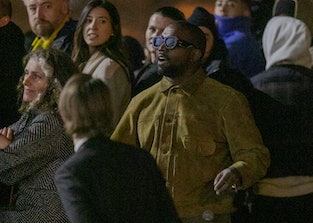 The amount MyChannel is seeking in damages from Kanye and his brand.

"Failure to pay" is becoming a regular thing at Yeezy, as Kanye West's brand has been sued by yet another contractor. The latest suit comes from MyChannel, a Black-owned tech company that's seeking $20 million in damages. This includes a $7 million investment from MyChannel, which had to move its headquarters twice to work with West.

MyChannel began working with West in the spring of 2018 on his Sunday Service concert series and to maximize revenue for Yeezy, TMZ reports. The company says it put in more than 10,000 man-hours of work in just six months before West cut ties. Prior to that, the suit says West had promised a $10 million investment in MyChannel. It also alleges that West stole MyChannel technology for use in his popular Sunday Service series, which may have garnered him millions of dollars.

The third suit in the last year — A lawsuit filed last September by the Japanese fabric company Toki Sen-I Co. alleged that Yeezy failed to pay for 53,500 yards of textiles, amounting to a loss of $624,000. The California judge in the case initially sided with West in May but gave the plaintiff the opportunity to revise its case before another hearing set for this month.

That same month, another company filed a suit claiming $125,000 in unpaid invoices. The plaintiff is Backbone PLC, a company that licenses its product management tools to clients including KITH, Allbirds, and Outdoor Voices. Of its $198,000 subscription fee for two years of services, Backbone says Yeezy only paid $43,200. Eight months of invoices were ignored by Yeezy, according to the suit, before Backbone took the issue to civil court.

While all of these cases are ongoing, it suggests Yeezy has a history of shorting much smaller brands. Such shady business dealings should be something of a red flag for a presidential candidate, but then again Donald Trump is already in office.

Not a great week for Yeezy — Along with Adidas, Yeezy has been the subject of criticism for two sneakers named after Islamic angels. Muslims have called to change the names of the "Israfil" and "Asriel" Yeezy Boost 350 V2s. The former (named for the angel of music) released last week, while the latter (the angel of death, typically spelled "Azreal") is due to drop sometime in December.

Two petitions calling for the name change have together totaled more than 3,000 signatures, with one of them calling for an outright boycott of Adidas by the Muslim community until changes are made and an apology is issued.

"This is highly offensive to the Muslim community," the petition reads. "Having the names of angels, which we revere highly on a shoe which is used to walk on the street is a huge form of disrespect in all Muslims (sic) communities."