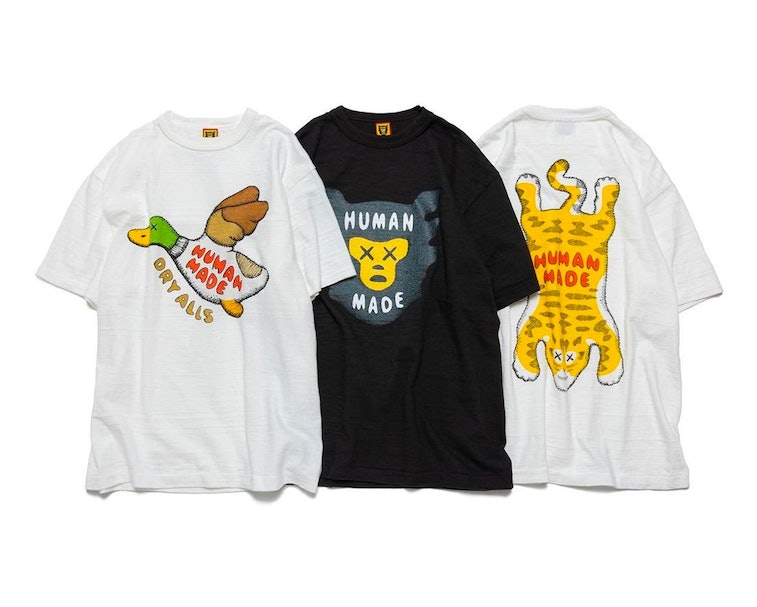 Hypebeast favorite artist KAWS will give his fans more T-shirts to fawn over in a new collaboration with Human Made. The Nigo-led brand has announced five tees with the KAWS treatment will release this week, and the names involved are all we need to know to confirm an immediate sell-out.

Sending hypebeasts in a scurry is as easy as applying a pair of “X” eyes — and that’s exactly what KAWS has done with Human Made’s signature animal graphics. The duck, ape, and tiger have all been given the street artist’s cursory treatment, while the remaining two T-shirts have yet to be revealed. Don’t hold your breath for anything less phoned in to complete the capsule, as effort is practically irrelevant in the matter.

The collaborative T-shirts are set to release this Friday, July 23, exclusively through Human Made’s website. A two-item-per-person purchase limit has been set, but don’t expect that to curb the inevitable profiteering on the resale market.

KAWS need not try very hard — Depending on who you ask, KAWS is either a hack or a pioneering street artist who’s found his kinfolk in streetwear consumers. The truth is probably somewhere in between, with criticism coming automatically and perhaps too harsh, and his rabid audience of hypebeasts still worth rolling your eyes at.

Whenever he links with a streetwear brand, KAWS can turn the simplest of efforts into a “must-cop” event. His first Supreme Box Logo T-shirt released earlier this year was hardly that imaginative, but that didn’t stop the chalk outline graphic from selling out within seconds. Resale prices, however, are shockingly low considering that any Box Logo is a guaranteed payday — which is more likely a sign of waning enthusiasm for Supreme and/or increased stock from the brand than a knock against KAWS.

Other artists may be doing more interesting work, including in collaboration with brands like Supreme, but for the foreseeable future, nothing will stoke the fire of hypebeasts’ little consumerist hearts quite like KAWS.

More like this
Maya Ernest
17 hours ago
Style
The North Face taps Drag queen Pattie Gonia to celebrate Pride
Andrea Carrillo
16 hours ago
Style
Adidas and Balenciaga’s collab will give you a run for your money
Maya Ernest
5.21.2022 2:15 PM
Style
How to dress like pop icon Harry Styles for under $100