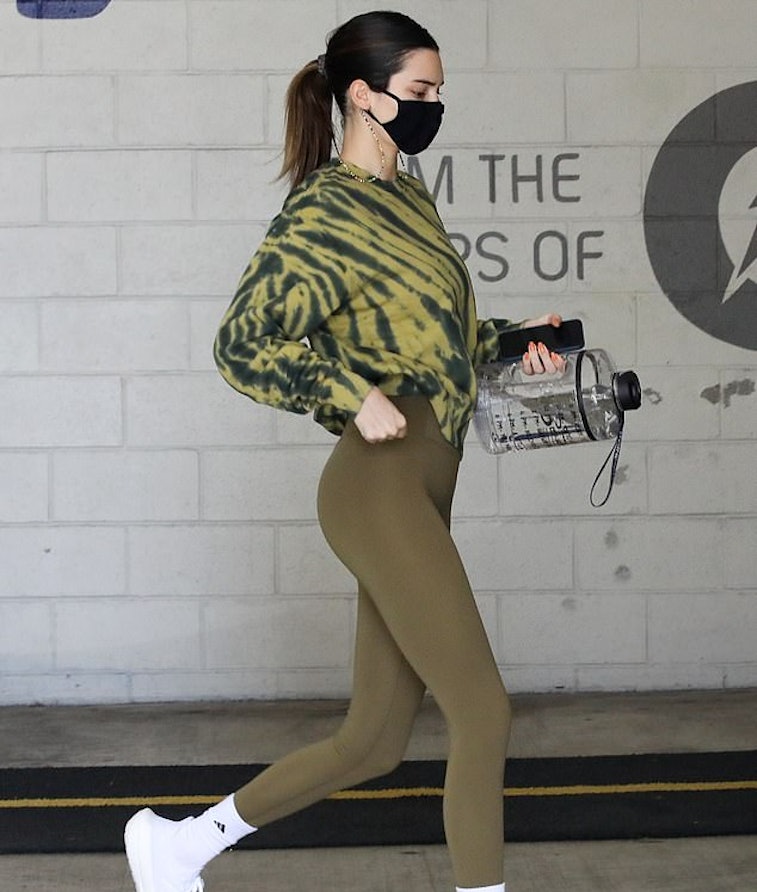 “Drink more water” is an inescapable, arguably overused piece of wellness advice. Celebrities, influencers, and wellness gurus often credit their daily eight glasses for glowing skin, increased energy, and even shedding pounds. But a certain supersized genre of water bottle, and the customers obsessed with it, are turning hydration into a bizarre and fiercely competitive game.

Actively drinking more water can be a tough goal for many people: counting bottle refills isn’t a priority for those with demanding schedules, and some simply don’t like the taste. Wellness influencers tout lemon water as a solution, while the tech industry pumps out water-tracking apps or even bluetooth-synced smart bottles. However, it’s the simple solution of a comically large water bottle that’s garnered the most hype.

Massive half-gallon or gallon-sized water bottles have formed their own devoted subculture, mimicking the brand loyalty and demand-driven competition of streetwear. Aside from their jarring size — a gallon of water weighs over eight pounds, and any bottle big enough for it would eclipse the average human head — these bottles typically come in stylish colors or printed with motivational phrases. Their popularity is understandable: a toddler-sized bottle makes it much easier to hit your daily water intake in one go, and it’s a lot less embarrassing to lug around in a trendy print. But the cult-like communities cropping up around these bottles, as well as the motivational phrases printed on some of them, turns the act of drinking water into a game.

Karina Rabin, a fitness influencer and health coach, doesn’t really care that her 128-ounce HydroMate bottle tries to motivate her. HydroMate launched just two years ago, but quickly caught fire thanks to the encouraging quotes and time markers printed across each gallon bottle (starting with “READY. SET. DRINK!” at 8 a.m., and “NO EXCUSES” halfway down at 4 p.m.). Its bold text and neon colors pop from Chrissy Teigen’s Instagram stories, and paparazzi photos of Kendall Jenner leaving pilates — that is what got Rabin hooked.

“It's become part of my life.”

“I thought it was really cute, and I knew it would look good on camera,” said Rabin, who bought her hot pink HydroMate after seeing a friend carrying one. The fuschia bottle doesn’t just make cameos in Rabin’s daily gym livestreams; she never leaves the house without it. “It's become part of my life,” she added.

HydroMate might be the most recognizable of the XXL-water bottles, largely thanks to the motivational schedule scrawled across each one. Aside from ultra-saturated color options, which includes solid hues and neon gradients, HydroMate bottles provide timed hydration goals. Gallon-drinkers should be “HALFWAY THERE!” by 2 p.m. — and you’d better keep chugging if you want to be rewarded with “YOU MADE IT!” by 8. This is what fosters a game-like mentality around drinking water, and it’s what lures many people into committing to an intimidatingly large bottle.

“It goes everywhere with me.”

Due to a genetic kidney disease, Rabin was already drinking one gallon of water per day, on doctor’s orders. She’s now up to at least two gallons, which she credits to the size and style of her HydroMate. “It's hot pink, it's really loud, you can't miss it,” she said, citing her neon bottle as a constant visual reminder to keep sipping. “It goes everywhere with me.”

Another pioneer of this trend is HydroJug, which offers a dozen solid colors of its half-gallon bottle, as well as printed accessories like sleeves and carrying straps. The company launched in 2017, after its founders noticed bodybuilders filling old milk jugs with water to meet their higher-than-average hydration needs. While the HydroJug introduced obvious improvements from a milk jug, like a comfortable handle and safely reusable material, it unknowingly filled another key vacuum for huge water bottles: style.

Lexi Lewis, HydroJug’s public relations manager, credits this aesthetic upgrade to a major jump in sales, which continue to increase every year. Offering their massive bottle in colors like blush pink or matte teal, and adding changeable sleeves in prints like leopard or black marble, widened HydroJug’s audience from fitness junkies to anyone with style and the bicep strength to hold it. In turn, the sleek look and trendy prints made XXL water bottles less embarrassing to carry outside of the gym. “By making it stylish and fun, adding your own personal touch, it kind of becomes an accessory,” Lewis said.

It wasn’t long before HydroJug tapped into the streetwear playbook, scaling its hype with...water bottle drops. “We have limited-edition designs, we usually try to do one new jug and one new sleeve a month,” Lewis said. “That feeds into the obsession, because people want to collect all of them.” HydroJug’s calculated hype has attracted a fiercely loyal community of customers — and an Instagram following of 349,000 — who clamor to give feedback on design mockups, or tag two friends in a “see a chug, send a chug” story challenge.

On Facebook, however, there is a flourishing network-slash-black market dedicated to the brand, run entirely by its customers. “Our fans created their own groups, there are thousands of members and they just talk HydroJug,” said Lewis. There are currently 17 HydroJug-dedicated Facebook groups online, with over 13,000 members between them. Members post screenshots of HydroJug Instagram stories to try and spot future releases, or sell old limited edition bottles for an above-retail price. “It's a collector's item, like Pokémon or Beanie Baby,” Lewis added. “They don't necessarily need all the colors, but they have to collect them, it becomes like an obsession.”

This cult-like brand loyalty would not be mystifying — it practically mirrors streetwear’s drop-to-resale pipeline — if it wasn’t worshipping a 64-ounce water bottle. Obviously, there are HydroJug customers who genuinely drink more water thanks to an aesthetically pleasing bottle (which is, after all, the company’s mission). But thousands of others view the product as a collectible commodity; a matter of hype over health. Health fads are nothing new, but they usually involve selling something you didn’t know you needed (and probably don’t need). While Goop convinces its readers to buy “psychic vampire repellent spray,” motivational water jugs transform the motivation (and market value) of a basic human necessity.

Below the social media buzz and backdoor resale market, the root of this trend — staying hydrated — is well-intentioned, and necessary for literally every human being. If neon colors, exclusive prints, or motivational sayings make 128 ounces of water more palatable, a trendy bottle is well worth the investment. However, while the need for oversized water bottles will never go away, the hype and inflation around them might — so if you’ve been holding on to a deadstock, ultra-exclusive, HydroJug grail sleeve, maybe cash out sooner rather than later.