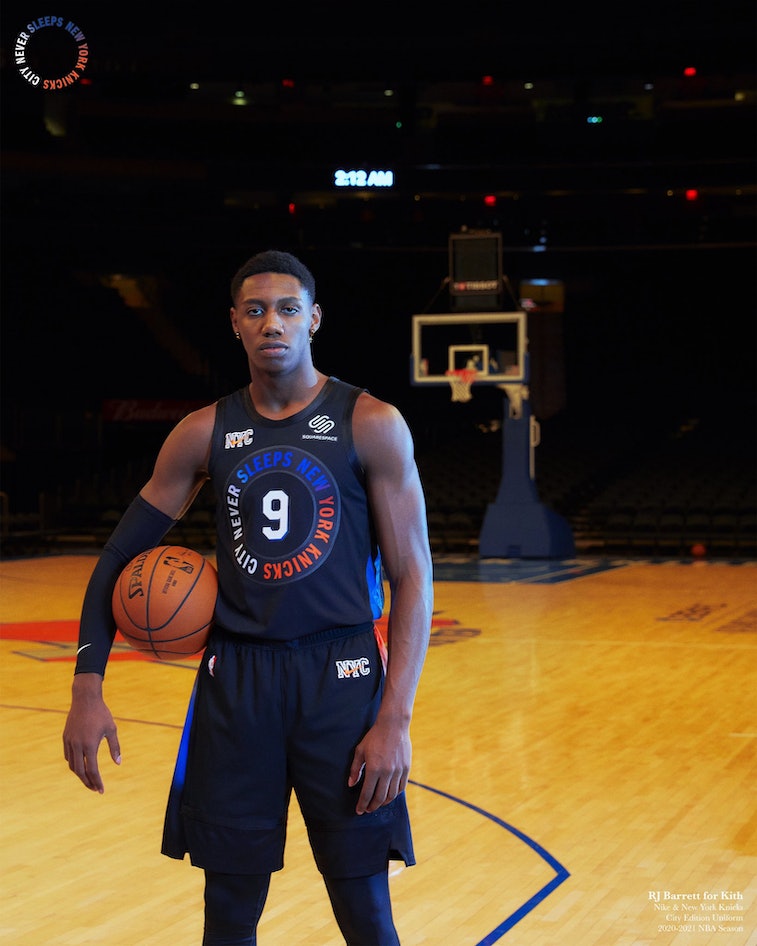 The National Basketball League's most shameful franchise has been given a jersey worthy of its stature, courtesy of streetwear's corniest brand. KITH has designed the New York Knicks' 2020/21 "City Edition" uniform, the term given to each team's annual cash grab of rolling out a new jersey for fans to buy. Somehow, it's even worse than you'd expect — proof that the KITH touch knows no depths of swaglessness.

The Knicks new black uniforms feature a dismal circular graphic with the phrase "City Never Sleeps." KITH's take on the trite motto for New York City would look bad enough on a poster tacked onto the walls of someone who just moved into the city, but the Knicks will have the dishonor of wearing it during Friday night games and on any unfortunate occasion when it plays in front of a national audience.

It's as if KITH founder Ronnie Fieg didn't think bearing witness to one of sports' most dysfunctional teams was punishment enough. The Knicks needed a uniform even more embarrassing than its seven-year playoff drought and track record of giving Joakim Noah a $72-million contract in the year 2016.

It gets worse — KITH has a remarkable ability to make any item of clothing or sneaker more indignant by slapping on its box logo. You better believe it would have done so on the uniform it designed for the Knicks, but League policies won't allow it. Unfortunately, the often strict hand of the NBA couldn't prevent a run of KITH branded apparel to run alongside the new jersey.

An alternate jersey, which won't be worn on the court, sees KITH's name superimposed onto the Knicks' logo. Wearing it would require not only the self-flagellation required to don visual signs of a hopeless fandom, but also the utter lack of taste requisite for KITH consumers. Inexplicably, the off-court jersey has already sold out — but there are more opportunities for misguided purchases.

KITH sullied a rare Dipset reunion by using the occasion to show off its other Knicks gear, which is set to release this Friday. Sweatpants with an allover print of the Nike Swoosh in orange and blue would be hot were it not for the KITH logo tacked on. The same could be said for a less colorful, allover Swoosh sweatsuit, as well as track pants with a blue-and-orange gradient Swoosh across both legs and a white Air Force 1 Low with orange accents and icy blue sole.

What can't be saved are the New Era hats with KITH's imposition on the Knicks logo. Elsewhere is a run of T-shirts and crewnecks that are more or less baseline KITH collabs, breathlessly combining the box logo with Nike's Swoosh for a tacky pileup.

KITH making unsightly clothes is hardly news, but you have to admire the brand's ability to rope in Nike, the Knicks, and Dipset while doing so. The unearned clout KITH wields is astonishing, and it's dispiriting to think about what a more worthy brand could do with such access. If anything, it goes to show how tasteless rich people are — from the ones who lend their name to KITH to the dopes who gobble up its product.