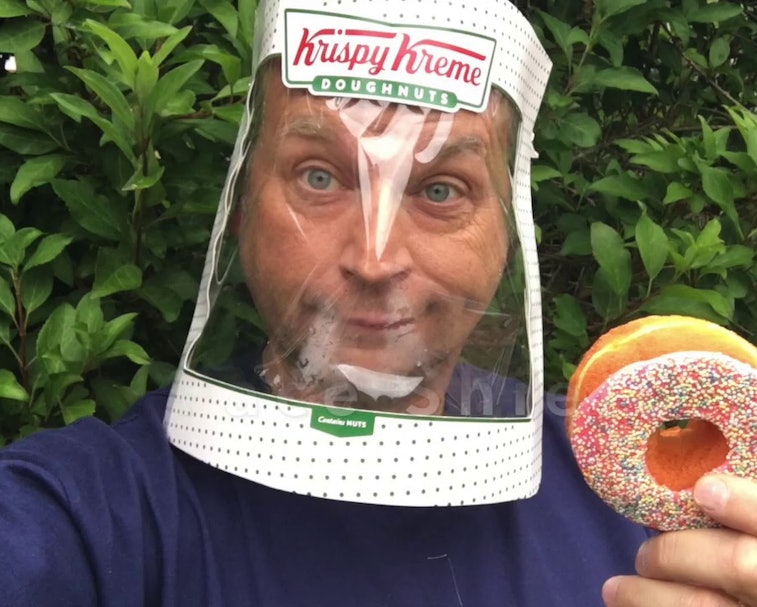 If I had to imagine the type of person who would look at Krispy Kreme box and think I should put this on my face, the assumption that they would be American would be so automatic it wouldn't even rise to the forefront of my consciousness. But much to my surprise, the person behind this DIY face shield tutorial beginning to make the rounds is decidedly British.

A YouTuber named Andy Clockwise converted the window that allows you to peak at your donuts into a working, if not appealing face shield. It's a suitable candidate for the DiWHY subreddit, but I guess if you're in a pinch or have a Homer Simpson-like devotion to donuts the face shield could be considered a reasonable solution for protecting yourself during the pandemic.

How it's done — The tutorial begins with a questionably used box that's cut into just the cover and side panels. With some clever cutting and folding, the side panels can then be used to wrap around your head and secure themselves via slits. At one point, the YouTuber says, "It's quite comfortable" — an assertion I just can't bring myself to believe. Just admit this thing is unwieldy and ridiculous and keep it moving, my guy.

If anything, this face shield is probably most efficient at trapping donut smells inside your nose and making you want to eat more. It could very well be guerrilla marketing by Krispy Kreme to sell more donuts. That, or just another bloke driven to odd time-wasting solutions during the pandemic.