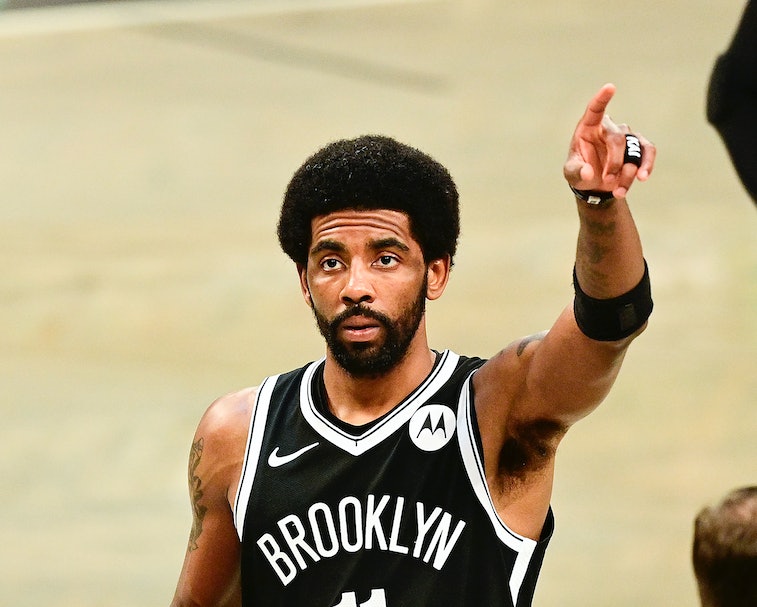 Since Kobe Bryant’s estate cut ties with Nike — a painful and poorly handled affair on the brand’s end — the Swoosh has focused on its other popular basketball lines, including Kyrie Irving’s signature sneakers. The Brooklyn Nets player, who has been signed to Nike for seven years, has helped create some of the brand’s best-selling shoes — but he had no input on the latest Kyrie sneaker design, he claims, calling the footwear “trash.”

In response to an Instagram post featuring leaked images of an unassembled shoe, said to be the upcoming Nike Kyrie 8, Irving commented, “I have nothing to do with the design or marketing of the upcoming Kyrie 8, IMO these are trash! I have absolutely nothing to do with them! Nike plans to release it without my okay regardless of what I say, so I apologize in advance to all of my sneaker heads and true supporters of the KAI11 brand.”

Out of touch — Last month, a similar scenario played out through a pair of “Mambacita” Protro Kobe 6 sneakers. After images of the unreleased shoe circulated the internet, Kobe Bryant’s widow Vanessa took to Instagram to speak out against the sneakers, saying she never approved their production. “I do not know how someone else has their hands on shoes I designed in honor of my daughter, Gigi, and we don’t,” she wrote on Instagram. Still, the footwear made its way into the hands of resellers, who offered the shoes online for nearly $7,000 before their listings were ultimately removed.

Irving’s complaint seems to go deeper than just production, though — according to his comment, he doesn’t agree with the overall design or marketing of the Kyrie 8, both of which he says he wasn’t consulted on. Looking at Irving’s statement, as well as the “Mambacita” sneaker, it’s clear there’s a disconnect between Nike and its athletes.

Despite the Kyrie 8 bearing Irving’s name, Nike likely won’t redesign the sneaker. Leaked images prove the brand is too far into the production phase to start over — at least, without losing profit. And while controversy will certainly make the Kyrie 8 more newsworthy, it’s up to fans to decide whether they’ll buy the sneaker, even after Irving himself called it “trash.”

Nike has no comment on the issue, a representative told Input.