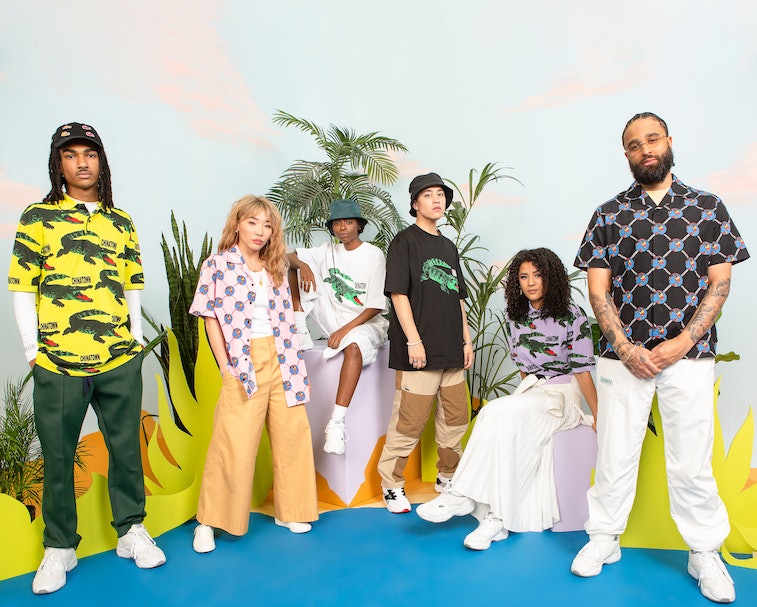 Lacoste isn't just for frat bros anymore. Over the past few years, the brand has worked tirelessly to expand its horizons, setting sights on flourishing spaces like streetwear — because, simply put, it wants to be "cool" again. As part of that transformation, Lacoste is launching a new capsule with Los Angeles-based Chinatown Market, which follows their brief partnership from 2018. The collection, one that Lacoste says focuses on its "edgy style" and "nostalgic touch," may be its boldest foray into the hypebeast territory yet, and it uses its iconic crocodile as the basis to make the set of t-shirts, hoodies, polos, and hats stand out.

The croc goes hype — The limited-edition, unisex collaboration comes only weeks after Lacoste teamed up with another streetwear brand, Concepts, on Boston- and tennis-inspired silhouettes that included sneakers, sweatpants, tracksuits, and other sleek apparel. And it shows that the company sees plenty of opportunity beyond its preppy roots, which aren't all bad but were definitely in need of a fresh take. These collections are the perfect example of how Lacoste can stay relevant, and that's great for everyone who wants to have plenty of choice when it comes to clothes — whether you're a hypebeast or not.

Aside from Lacoste and Chinatown Market putting the crocodile front and center, you'll notice the entire line of apparel is designed to be oversized, which is the complete opposite of how people have historically worn Lacoste's clothes. Bros love a tight polo shirt, preferably with a popped collar, and there's no denying that. Not that there's anything wrong that, for the record. If that's you, don't let anyone rain on your parade, keep doing your thing.

$$$$ — Having said all of that, don't expect the Lacoste x Chinatown Market collab to be cheap. For instance, a black hoodie with all-over Lacoste croc logos (which is a personal favorite) will run you a cool $338, while the beach-friendly button-ups are $158. In other words, if you like any of the pieces, you better be ready to break that wallet of yours, 'cause nothing here comes cheap.

While the collection dropped early on Tuesday via Chinatown Market's site, fret not. Lacoste will be having another drop on its site Wednesday, September 9, at 10AM ET. Considering how everything sold out in minutes during the drop ChinatownMarket.com, you'll need to be on Lacoste's webstore as soon as the clock hits the hour mark — otherwise, as has become the norm in streetwear, you'll be stuck paying a premium for anything you may want on the resale market. Save yourself from having to do that.