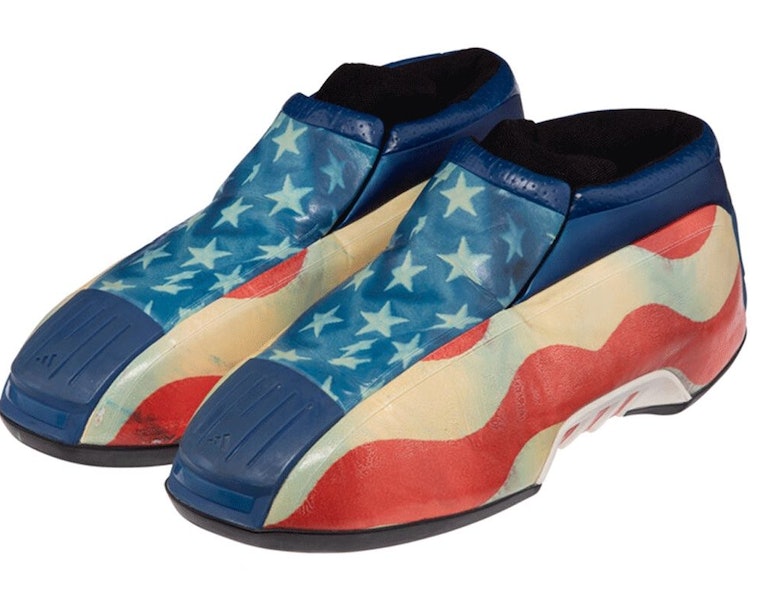 It’s been a year since the devastating death of basketball legend Kobe Bryant, and since then, we’ve seen lots of his memorabilia auctioned off. Jerseys, sneakers, and even a championship ring have been made available for bidding on auction sites. Now, the latest of Bryant’s goods to be auctioned is actually something he gifted to LeBron James, when the at-the-time rising basketball phenom was enrolled at St. Vincent-St. Mary High School in Akron, Ohio. Unveiled by Heritage Auctions, a USA-themed pair of Adidas Kobe 2s — game-worn by James — are on the block.

While new drops and retro styles go for hundreds on resale sites like StockX, we’ve seen an uptick in auctions for game-worn and rare original models. Most recently, a pair of 1985 Jordan 1s, signed by Jordan himself, was listed for $1 million on eBay, while a pair of Drake's unreleased 2017 Jordan 4 shoe sold for $32,760 at Sotheby’s late last year.

Even full collections have been sold off, with Stadium Goods and Christie's listing 11 lots of game-worn and player-exclusive sneakers from Michael Jordan’s career. For thousands of dollars, all these pairs promise their owner a literal piece of basketball history, and Bryant and James’ addition is no exception.

A meaningful message — Nearly 20 years ago, in 2002, James wore these loud sneakers on-court when he won his face-off against Carmelo Anthony during the highly-anticipated SVSM vs. Oak Hill academy showdown. The patriotic pair of kicks were originally produced for Bryant to honor those who lost their lives in the previous year's 9/11 terrorist attacks. It’s unclear why the Mamba gifted these shoes to James, but we can only speculate he was just as impressed with James’ skills as we were, and wanted to encourage his hard work.

“He gave me a pair of shoes that I ended up wearing the following night,” James told ESPN shortly after Bryant’s passing. “It was the red-white-and-blue Kobes,” James said. “I was a [size] 15 and he was a 14, and I wore them anyway, and I sat and just talked to him for a bit. He gave me the shoes and I rocked them in the game.”

Bryant’s gift to James bears white and blue star patterns on its tongue, while white and red stripes on the lateral and medial sides of the shoe complete its American flag graphic. Three Stripes branding is shown off through the rubber toe boxes and interior side of the tongues, while Bryant’s head silhouette rests on the inserts.

These shoes are incredibly rare, and not just because they were crafted for Bryant himself. James has come a long way since playing in these shoes, even securing a lifelong deal with Nike — meaning his game-worn shoes belong to the Swoosh, not Adidas. This gifted pair might be one of the only Adidas Kobe 2 sneakers worn by the legend out there.

High-priced history — Given the story behind these shoes, we won’t be surprised if they sell for hundreds of thousands. Sotheby’s sold off a pair of game-worn and autographed Air Jordan 1s from 1985 sold for $560,000 last year, setting a new record for the most expensive sneakers — of course, now topped by the million-dollar pair (if they sell). With history from both Bryant and James, these Adidas Kobe 2s are worth a pretty penny.

Bidding is now live on Heritage Auctions’ website, but before you head over, know the current highest offer is $18,000, and will probably be higher than that by the time you click on the link. If you’ve got the money to bid, however, you have until February 27 to submit your offer on the rare Adidas Kobe 2s. Good luck.