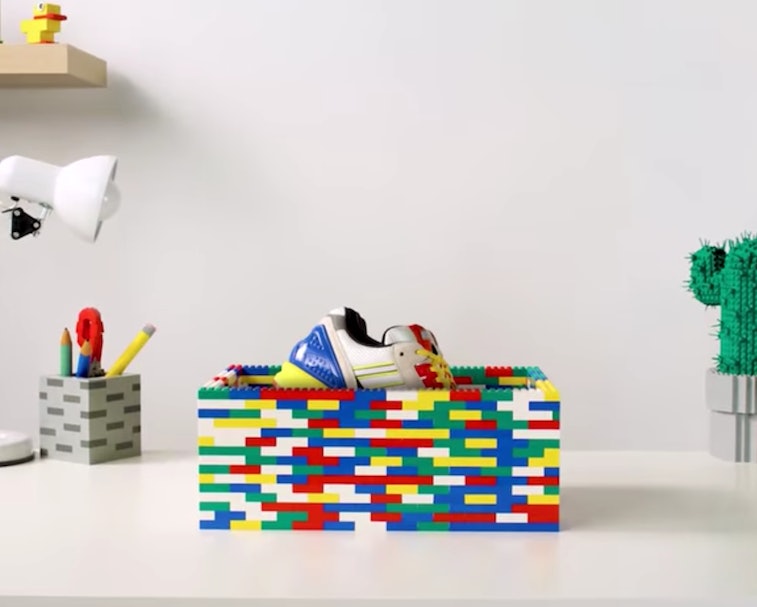 Lego and Adidas are playing the teasing game with a collaborative ZX 8000. The two brands have released a short trailer showing a glimpse of the colorful sneaker with blocky detailing. All the main colors from Lego are represented with splashes of red, yellow, green, and blue. A green Lego block even serves as the lace deubré, while the eyelets are also made of blocked plastic.

For now, we're left to pick at the scarce details as Adidas and Lego play with our patience and toy with our emotions. But from what we can see, it should be a fun shoe that tugs at our sense of nostalgia. If it's a limited run, it's also sure to fly off shelves, virtual or bricks and mortar. But here's hoping the companies make it a wide release so fans — of which there are sure to be plenty — aren't left wanting.

Will it really come in a Lego box? — The animated video shows the ZX 8000 emerging from two boxes, a blue Adidas Originals box with Lego studs on top and another made entirely from blocks. It's unclear if either will be part of the final packaging — the Lego-styled Adidas-branded one seems most likely, the other faux cardboard one made entirely out of brown Lego blocks looks... expensive — but if either makes the cut it will only add to the sneaker's appeal.

Hopefully, we'll find out more about the LEGO ZX 8000 soon, but Adidas hasn't given any indication of the timing surrounding the release. In the meantime, at least we have Ikea's Lego storage boxes to look forward to that drop on October 1, even if we can't wear them.

A 30-year-old favorite — The ZX 8000 first debuted in 1986 and in 1988 became the first shoe to feature Adidas' Torsion technology. A lightweight arch helps provide additional support and allows the forefoot and rearfoot to move independently from each other. It's still used in the Ultra Boost today, but the ZX 800 is best known for its popularity among European sneakerheads.

Adidas' ZX line has long been a favorite amongst the propagators of roadman style from Manchester. The technical runner was comfortable for all-night raves, and its bold colors and design paired well with the tracksuits popular within the subculture.

The colorful Lego version will hit the same notes, while also appealing to anyone who played with the blocks as a child (i.e. just about everyone).