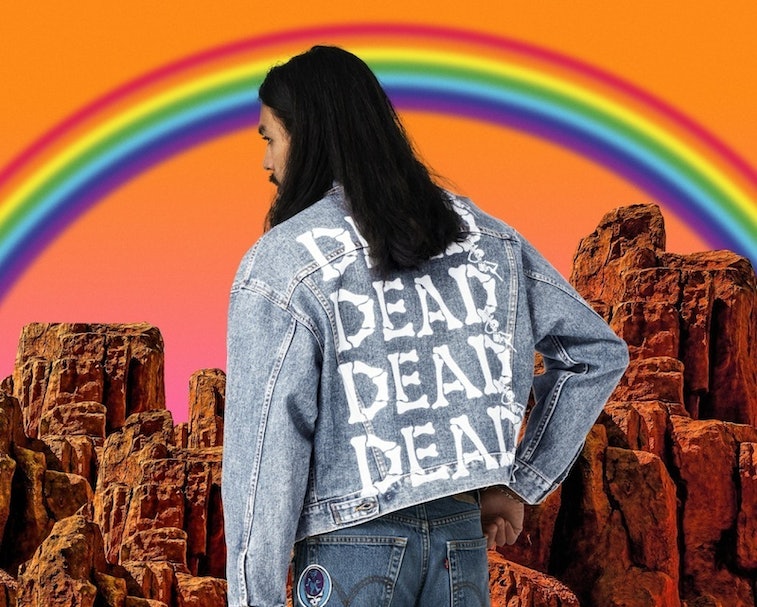 The Grateful Dead’s trendiness in fashion may not have much life left in it, but Levi’s is set to squeeze out whatever’s left of it.

A new collaboration between the San Francisco-based stalwarts will arrive later this month and perhaps a year later than it should have. Proper Deadheads shouldn’t have a problem with a partnership, unlike when the band linked with Nike, but the problem with fashion appropriating a once-foreign subculture is that it isn’t bound to last long. Few of the people rocking Dead gear at the height of the trend could even define what a jam band is, and we’ve already seen the faux fandom die down.

This decreased appetite for Dead merch could be a boon for the real heads, however. Come July 27, when the collaborative capsule drops, hype-fuelled sellouts may no longer get in the way of the garms landing where they truly belong.

The clothes themselves are serviceable enough — Levi’s range of official Grateful Dead denim and T-shirts are just plain fine and would rise to the level of cool if, say, your dad was wearing them. Online Ceramics, the streetwear brand rooted in bootleg Deadhead merch, has a much more deft hand in graphics — and its application of them to a wider appreciation of nature, creativity, and harmony makes it one of the few progenitors of the trend that will continue to endure.

Short- and long-sleeve tie-dye T-shirts make use of the iconic “Lightning” and “Rose” skull symbols, while jeans indulge a superficial DIY aesthetic with patches sewn onto the rear. A denim jacket also sees a repeating “Dead” print in bone font on the back similar to the style of Kanye West’s own “Pablo” piece — which goes to show just how original the whole affair is.

The collection is specifically tied to the 50-year anniversary of the band’s second live double LP, Skulls & Roses. Fans who know the significance of the album may be the only ones who’ll get excited over the merch — which will release on Levi’s website, app, and in stores — marking a return to stasis for the once-niche aesthetic.