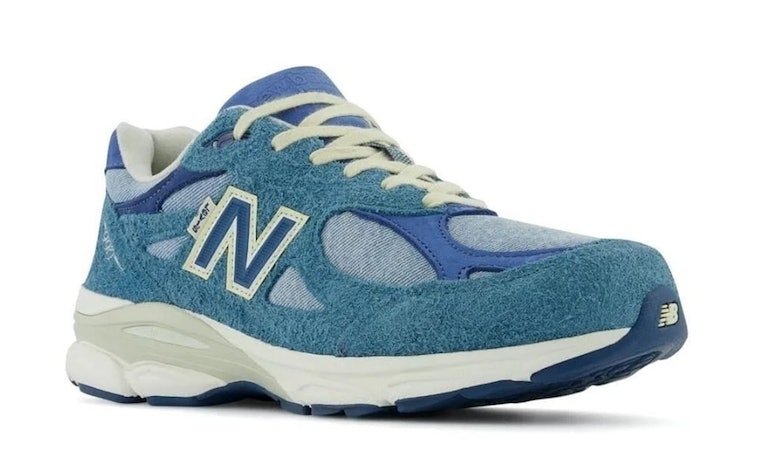 While some of us are ditching jeans in favor of more comfortable post-quarantine wear, brands like Levi’s are ensuring we keep denim in our rotation — even if it isn’t on our legs. The American brand reportedly has another partnership with New Balance in the works; a leak shared by @zackj__ shows off official product images of a collaborative 990v3, which comes covered in denim layers and rugged suede.

Levi’s first began working with New Balance in April 2020 after they dropped a special “Levi’s for Feet” edition of the 1300 silhouette, which was then followed up by a three-piece Levi’s x New Balance 327 collab. The upcoming 990v3, however, is arguably the brand’s best New Balance design yet.

Aged yellow laces and midsoles emphasize the sneaker’s vintage appearance, calling back to the ‘80s era of Americana, blue jeans, and Bruce Springsteen. While the 990v3 doesn’t bear an American flag — or even the color red for that matter — the shoe’s Levi’s denim and New Balance construction seems to represent the country outright. Of course, wearers could opt for a Canadian look by styling these sneakers with a full-on Canadian tuxedo, but the move would likely be confused as a tribute to Britney and Justin’s iconic 2001 American Music Awards fits.

New Balance’s typical “N” branding sits on the sneaker’s sides, while Levi’s has added its own touch through a small tab on the NB logo — giving the shoes that much more of a Levi’s jeans construction. Additional Levi’s branding comes on the insole, which reads “Levi’s for Feet.”

Don’t cream your jeans yet — A release of the Levi’s x New Balance 990v3 is expected later this year, though no official date has been confirmed by either brand. Its drop will likely accompany another anticipated collaboration from the two labels — a denim 992 model leaked last year — which New Balance senior collaborations manager Joe Grodin confirmed would drop “very soon.”