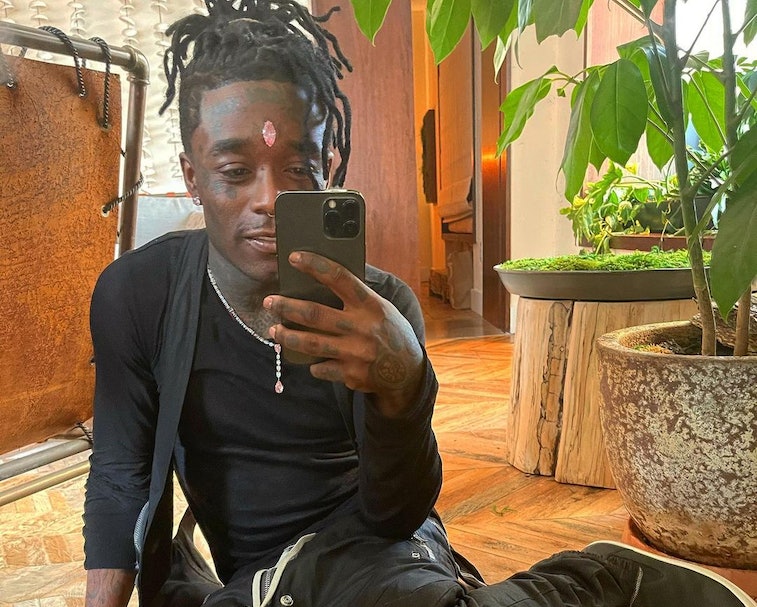 Hip-hop history is rich with outrageous chains, but Lil Uzi Vert may have outdone them all by implanting a massive pink diamond in the middle of his forehead.

The 26-year-old’s new piercing has been the talk of the genre for the last week — and for anyone who enjoys dishing over (or criticizing) exorbitant purchases. In his short career, Uzi has been one of the most adventurous (and gender-defying) dressers around. And while the colossal diamond at his third eye may be unexpected, it does make some sense in the canon of Lil Uzi Vert. He’s a noted anime enthusiast, and the placement of his pink jewel has drawn comparisons to Sōsuke Aizen from Bleach — and less accurately, Marvel’s Vision character.

Uzi hasn’t been shy about the extravagance of his pink diamond. In a series of tweets, he said he’s been making millions of dollars in payments to the jeweler Eliantte and Co. since 2017. He added that the “10 to 11 carat” gem cost him more than his $1.7 million Bugatti Grand Sport, and his friend CEO Slow put the total figure at $24 million in an Instagram story.

The inevitable onslaught of media coverage has run with the $24 million figure without much skepticism. Even for one of the hottest young rappers in the world, $24 million is still a staggering amount of money.

Forbes put Lil Uzi Vert at no. 17 in its 2018 “Hip-Hop Cash Kings” list with $19.5 million earned in the previous year. That was the only year in which Uzi appeared among the 20 highest-earning rappers — Forbes didn’t publish its list in 2020 — and the less reliable website Celebrity Net Worth estimates his gross career earnings at $30 million, good for a $16 million net worth.

Even if Lil Uzi’s net worth is indeed higher than what Forbes suggests, which isn’t unlikely, it’s hard to believe he spent $24 million on a single stone this early in his career.

To get some perspective, Input reached out to the Brooklyn-based jeweler Bernard James, whose work frequently involves diamonds in unusual colors. While James expresses skepticism over Lil Uzi Vert paying full price for what has ultimately been great promotion for Eliantte and Co., he says the cost for gems of that size and rarity can ultimately be determined by the seller.

"You can definitely give a rough estimate for what a diamond might be worth from looking at it, but you don’t really know until you look up close," James says. “The value depends on the four Cs: clarity, cut, color, and carats. But at the end of the day, if the market is still that — a market — and if it’s rare or isn’t known to exist elsewhere, the seller can pretty much dictate the price.”

The largest pink diamond ever auctioned, nicknamed the “CTF Pink Diamond,” weighs 59.6 carats and sold for more than $71 million in 2017. Only one percent of pink diamonds — which were only discovered in the 17th century — are said to weigh more than 10 carats. A gem similar in size to the one Uzi had implanted into his head, according to his own reports, sold for nearly $20 million (10.65 carats) in 2019.

And however much Uzi ended up spending, it’s been a worthwhile investment for his own brand building.

So while it’s not unreasonable to place the value of Lil Uzi Vert’s diamond at around $24 million, it’s harder to believe he was made to pay full price. Eliantte and Co.’s name is all over the news, including an interview with Rolling Stone. That earned media certainly could have shaved off a few million from the price alone.

And however much Uzi ended up spending, it’s been a worthwhile investment for his own brand building. The recent buzz around his piercing rivals that of an album release cycle — and it wouldn’t be surprising to see an uptick in his music streams.

Oh, and the piercing is indeed safe, if not uncomfortable. The blood that came oozing down his forehead is not uncommon in the early stages of healing. Go figure.