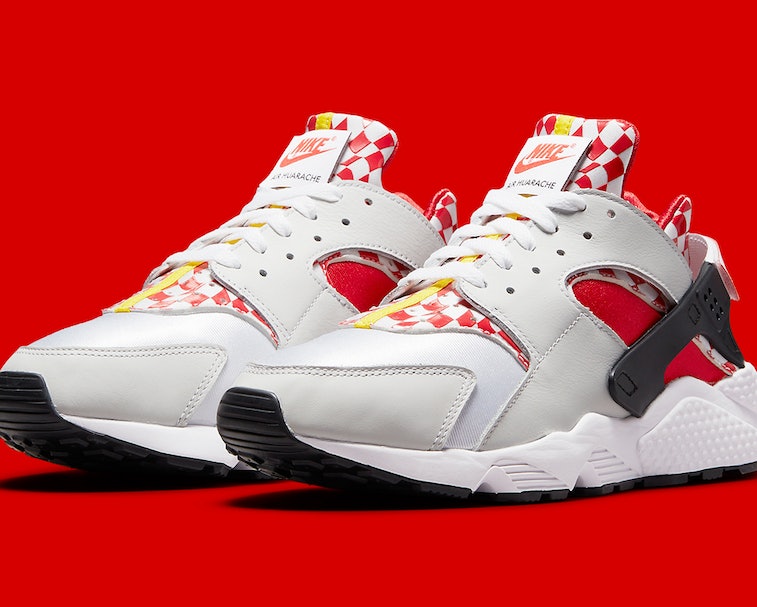 Liverpool is now in its second season with Nike as its official sponsor, and a new pair of kicks show just how sweet life can be under the Swoosh. Images have surfaced of a pair of Air Huaraches created specifically for Liverpool, which are set to become a must-cop for any Reds fans.

A primarily tonal white upper is broken up by a dashing red and white checker print with a bright yellow stripe running up the length of the tongue. Liverpool’s logo is actually nowhere to be seen on the surface and is used only on the insole, but real ones will know that the removable heel tag’s “YNWA” stands for the club’s motto “You’ll never walk alone.”

While a release date has yet to be confirmed, the Liverpool Air Huaraches are expected to release by the end of the year. Until then, we can all but guarantee we’ll see them on the feet of LeBron James, a part-owner of the club who appeared in the promotional campaign when Liverpool first joined Nike last year.

Don’t miss out — Nike and Liverpool previously released a sold-out Air Max 95 with the club’s shade of red popping out from the predominantly black sneaker. But there’s one Liverpool sneaker that stands above the rest, and it also involves LeBron James.

Back in 2012, Nike released a pair of LeBron 9 Lows in Liverpool colors to celebrate James’ investment in the British soccer club. Rumor has Nike will soon reissue the sneaker as part of its LeBron Retro series, and the 10-year anniversary of the sneaker in 2022 would mark the perfect occasion, leaving not one but two Liverpool sneakers for Reds fans to look forward to.

“You’ll never walk alone” is one of the coolest mottos in sports — it pains me as a Chelsea fan to admit it — and never will it be more true than when you can rep it on your feet.