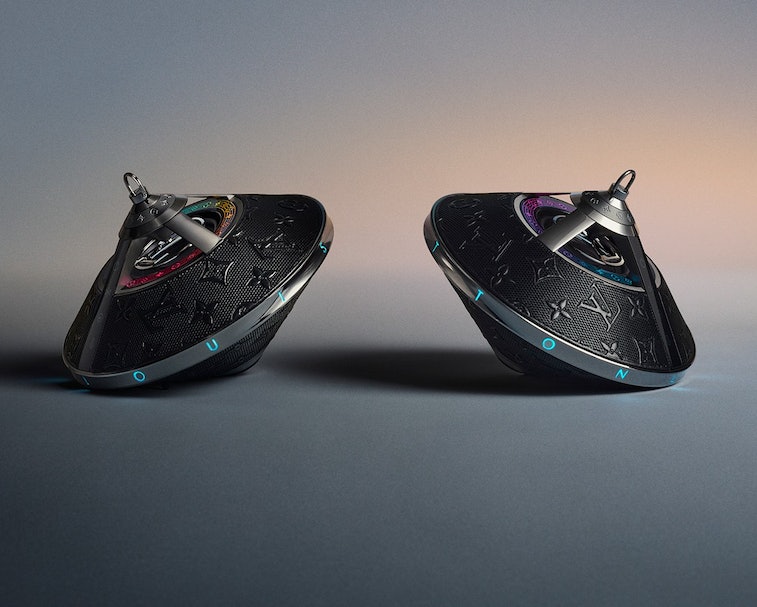 Louis Vuitton has concocted a wireless speaker that gives us much to talk about, and none of it involving how it sounds. The Horizon Light Up is a leather-bound wireless speaker designed to look like the brand’s Toupie (or spinning top) bag. But because of all of the lights, it leaves behind its analog toy origins and instead comes out looking much more like a UFO.

The French luxury house’s name is spaced out around the speaker’s widest point at its center, while the LV monogram adorns the surface in leather as it narrows in. Louis Vuitton’s signature pattern also surrounds the subwoofer in lights that, along with LV’s name, change color gradients in sync with music.

Louis Vuitton’s new speaker can pair devices via Bluetooth, Wi-Fi, AirPlay 2, and more. If you want it to remain stationary and treat it like an art object, which is not a stretch setting aside taste, the Horizon Light Up comes with a stand that doubles as the charging dock. And if you want to take it with you wherever you think you may be spared from mocking, you can do so with a removable leather handle.

What are its specs? — We have no idea. Louis Vuitton’s landing page for its new speaker is populated, for some reason, with tutorial videos for its Tambour Horizon watch. A link for more details also lands on the wrong product, leaving us only with highly stylized photos of what’s guaranteed to be a splurge.

Do the specs really matter, though? It won’t be audiophiles lining up to buy Louis Vuitton’s wireless speaker, but instead those who see more value in the flex. LV already has wireless earbuds that wrap Master & Dynamic tech with opulent branding for a nearly fourfold increase in price. The best wireless speaker you can buy can be found elsewhere, but Louis Vuitton will happily sell you what is either the most extravagant or douchiest one on the market.

The price for the Horizon Light Up has yet to be announced, but that doesn’t matter either. You already know if you’ll buy it or not ahead of its July 30 launch, whatever the damage may be.