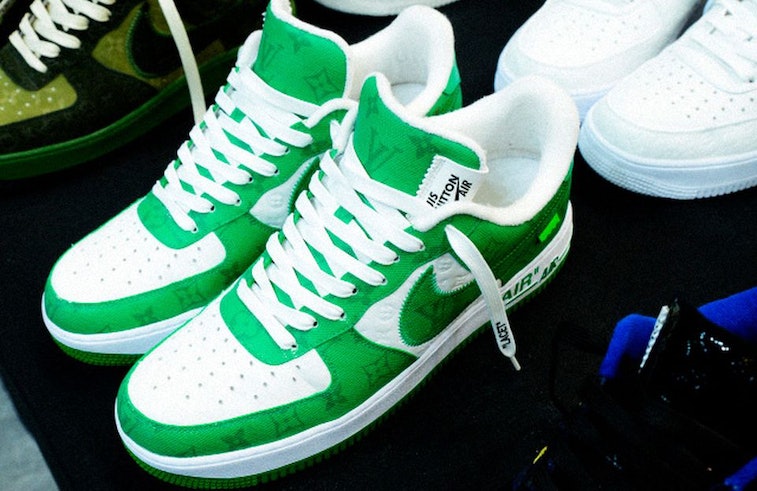 Virgil Abloh’s influence remains as present as ever. The shockwaves of his death still radiate through the fashion world, especially as his final pieces continue to roll out. Louis Vuitton and Nike are ready to present the Air Force 1 sneaker pack that was first seen last summer and at Abloh’s final LV show in November.

As secretive as ever — The sneakers encapsulate all of the signature details from its three collaborateurs – Louis Vuitton, Virgil Abloh, and Nike – including the LV monogram, quotation text, and quality leather construction. The laces featured a quoted “Lacet” (French for shoelace), and customized tags and patches appear on the Swoosh, tongue, and heel of certain pairs. There were 21 different colors that debuted at the LV show, but the fashion house remained allusive as to how many contenders would officially see the light of day.

According to Instagram (@ready2cop), however, at least six have already been photographed in-hand, but it could just be social media clickbait. Among those teased are emerald green and navy blue Air Force 1 Highs, a white and black metallic Low, and green, blue, and yellow Lows.

The French reseller suggested a drop as early as next month, but LV and Nike have remained tight-lipped since the shoes’ summer premiere. The prediction may not be far off since Spring/Summer collections tend to launch on the runway in February anyway.

The show goes on — Louis Vuitton’s Nike collab was rumored to see a launch following the final runway show last year, but given Abloh’s untimely death the brands postponed it to show their respects. It would’ve been nice to see a more honorable display, like an immortalization in the Nike headquarters, but it seems the mourning period is over and it’s time to play cash cow.

The anticipation for the Louis Vuitton and Nike Air Force 1 sneaker pack is definitely going to keep rising along with its resell value. As the AF1 turns 40 this year, Nike has even more reason to hike the price and save its best gems for the right time. Either way, expect to ditch any money-saving New Year resolutions for this drop.