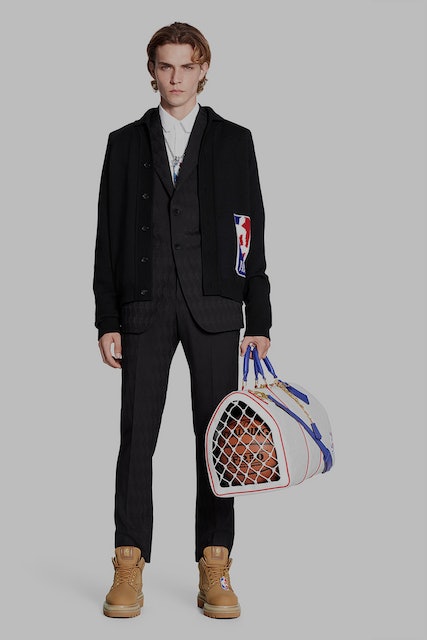 When the first images of Louis Vuitton's collaborative NBA sneaker first surfaced, there was hope that it was an aberration. As it turns out, the full collection is just as bad. It's as if Virgil Abloh saw the image turned meme of Rob Lowe wearing an NFL hat at the Super Bowl and said, That, but prohibitively more expensive.

The range of apparel, footwear, and accessories sees the NBA logo applied as anyone but a league executive would think to wear it. There it is, in all its noncommittal glory, knit onto a black cardigan, slapped on top of Louis Vuitton's monogram print, and decorating shoes that might otherwise be respectable. It's bizarre to think anyone loves basketball and neutrality enough to wear Jerry West's silhouette, and now that proposition has been made more audacious by putting it in Louis Vuitton's price range.

How do you do, fellow basketball fans? — This "How do you do, fellow kids?" of fan apparel is intended to represent the three stages of a player's wardrobe. There's "game arrival" gear, composed of sweatsuits and windbreakers; "travel" repped by the goofy bags; and "press conference" attire going smarter with shirts, suits, and the aforementioned cardigan.

Perhaps it's fitting for the collection to be based off NBA players, most of whom can't dress for shit despite having stylists on their side and a wave of unscrutinizing Instagram accounts to document their sartorial choices. Only someone with a distinct lack of taste and windfall of cash — i.e. a person that wears Amiri jeans — could love such a collection.

Louis Vuitton's staple Keep-All has been done up in white with blue and red accents and side panels replaced with basketball nets. A leather bomber jacket applies the LV monogram onto an oversized basketball graphic in blue or black. Loafers are hit with a gold NBA fastening. It's all atrocious, but there may be one motif to save the capsule from complete oblivion.

The all-over logo print is actually good — For the suiting, Louis Vuitton has opted for an all-over print of the NBA logo that eschews the borders and might actually look good. It's possible that the suits benefit from appearing next to such monstrosities of clothing, but the play on the houndstooth pattern is clever enough to pass muster. This treatment also appears on a camp collar suit that's probably the most wearable item in the entire collection.

Even then, it would be hard to justify the inevitably high asking fee come November 20, when the full collection releases. Should you have the money to waste, you're best off saving it for something else and watching actual NBA players make the mistake for you.