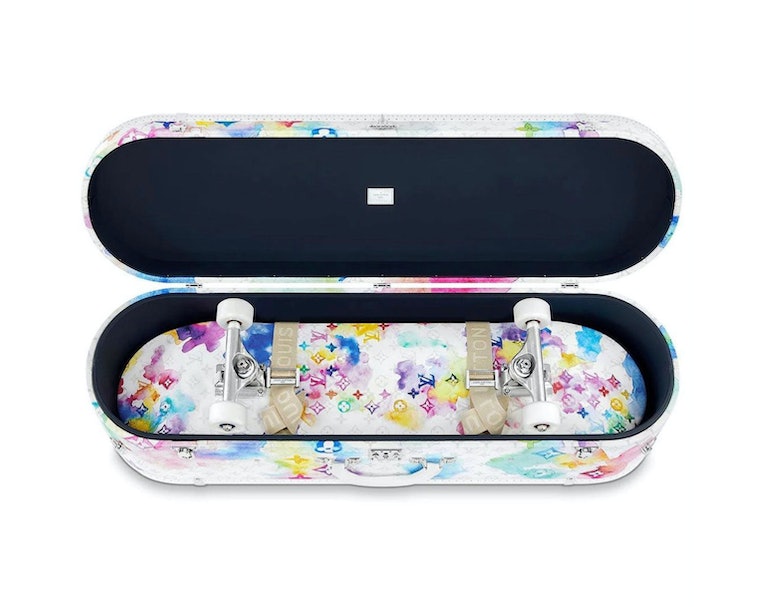 Louis Vuitton, keeping with its reputation of exclusivity and ostracizing the poor, has debuted two $2,660 skateboards. Exhibiting “masterful craftsmanship,” the boards feature Louis Vuitton branding on their decks, wheels, and screws to demonstrate the brand’s attention to detail (and attempt to justify the price).

In its entirety, Louis Vuitton has only produced skateboards twice before, making these iterations that much more exclusive. Previous stunts — including the brand’s 2009 graffiti skateboard with Stephen Sprouse and its iconic 2017 collaboration with Supreme — have resold not at StockX, but at Sotheby’s for $88,200.

Same old, same old — Virgil Abloh, who’s served as Louis Vuitton’s artistic director of menswear since 2018, designed both impending skateboards. Nodding to his recent work, one board features the radiant “watercolor” design seen in LV’s Spring collection, while the other bears a stripped-back maple wood finish engraved with an allover LV monogram. Both skateboards come with transparent grip tape — in a matching monogram print, of course — alongside engraved wheels and screws.

Neither design, however, has impressed consumers. “[Are the boards] really designed by Virgil if it’s the same LV pattern on every other product they’ve ever made?” one Instagram comment noted, nodding to the monogram print. Another, who identified themselves as a skateboarder, added that the boards should come with a screwdriver to help make them more functional — as if purchasers weren’t planning on hanging the design up on a wall.

Complete the set for only $56k more — Still, Abloh has somewhat of a Midas touch. No matter what the designer makes — or how expensive it is — consumers are sure to sell out the product in seconds. Well aware of this notion, Abloh has prepared an ultra-exclusive case to accompany his $2,660 skateboards, making an irresistible set that in total costs $58,500.

Decorated in a colorful watercolor design, the white skateboarding trunk comes debossed with an all-over Louis Vuitton monogram. White leather straps, including a long one to make traveling with the board easier, accompany the case’s silver hardware for that luxury look synonymous with skate parks.

Those that are only interested in Louis Vuitton’s $2,660 skateboards can easily access them online for immediate purchase. On the other immensely rich hand, those willing to drop $58,500 on a branded skateboard and trunk must place an order through Louis Vuitton’s customer service where, upon request, the set will be made to order. Decisions, decisions…