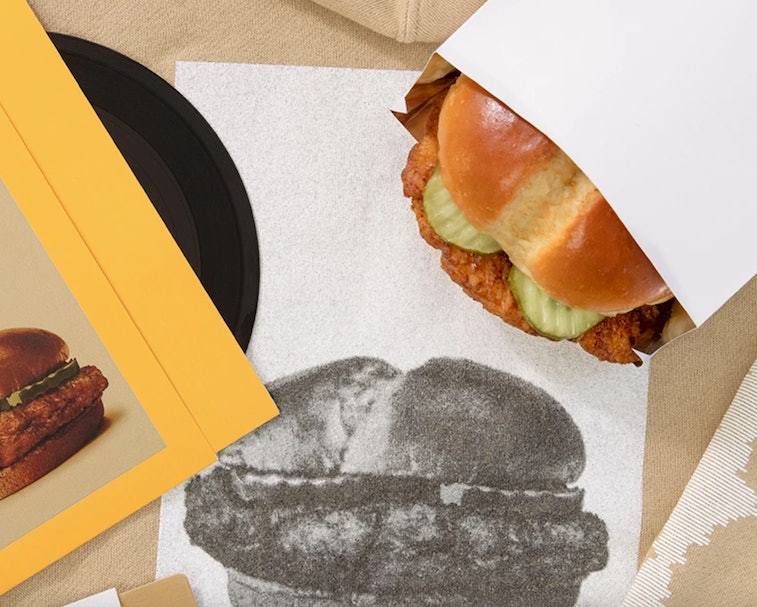 If you thought McDonald's bricking its J Balvin collaboration would be the end of its musical partnerships, Ronald has burst in to announce the tour must continue.

Tay Keith — the producer known for working with Travis Scott, Drake, and BlocBoy JB — will become the third musician to bathe in money rained down from the Golden Arches. His partnership will follow a slightly different model than J Balvin and Travis Scott's, as he's helping to launch the new Crispy Chicken Sandwich instead of his own meal. And in an act of going above and beyond, Tay Keith will also release a song as an ode to the newly launched Crispy Chicken sandwich, available on vinyl for prosperity.

This latest exercise in pushing McDonald's on Millennials and Gen Z will kick off Thursday, February 18, through a new dedicated website. There, fans will also get "exclusive access" a day early for Tay Keith's chicken sandwich meal. If you aren't among the first to eat the ordinary meal pumped up with pomp and circumstance, do you even like hip-hop?

Here we go again — McDonald's announced its Tay Keith partnership on Instagram in shitpost form, pointing followers to the yet-to-be-launched website with the caption, "guys my new website is really coming along."

Come Thursday, fans will be able to purchase a $5 bundle consisting of a hoodie, the song no one asked for, and that covetable early access to the brand new Crispy Chicken Sandwich, a day before it launches nationwide February 23.

The hoodie uses its front space to commemorate the momentous occasion with the file name for Tay Keith's song and the month of its release. A print on the sleeves features the very same wavelengths as the song — and that, my friends, is synergy. Finally, you'll find an artsy black-and-white photograph of the sandwich on the rear, along with the text "crispyjuicytender." Yes, that's one word, no cap(s).

You gotta admit, it's a good deal — As needless as each of the components are, $5 would be a steal for just the hoodie alone. McDonald's is obviously taking a loss on the bundle itself and will seek its financial return on standalone sales for the new chicken sandwich.

The Chicken Sandwich wars, started by Popeyes, have now been escalated. Who else can say they got the producer of "Sicko Mode" to promote their entry into the hottest item in fast food?