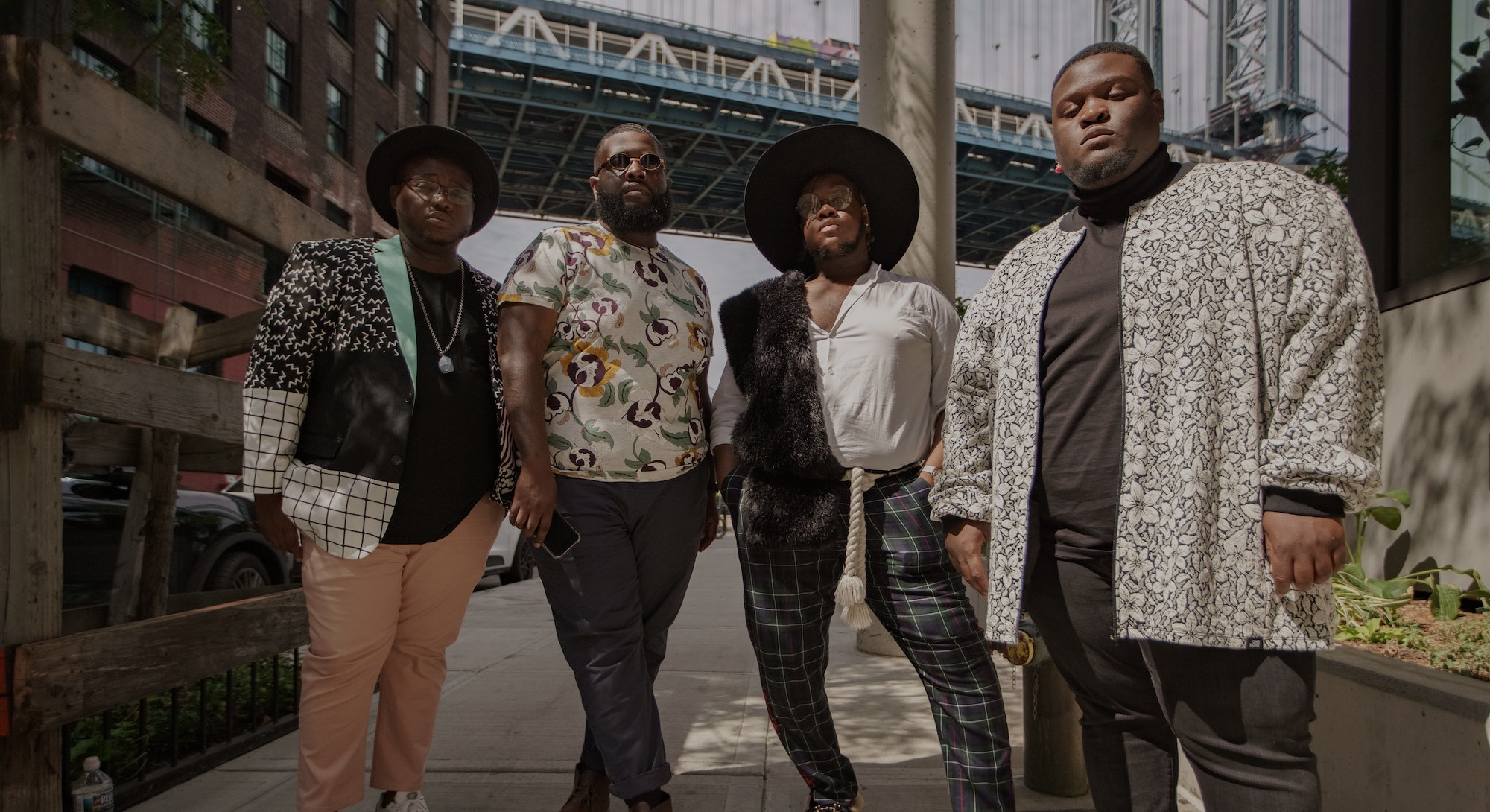 When Tevin Evans dies, he wants to be buried in a Dolce & Gabbana suit. He’d prefer to wear one while he’s alive — but he’s never been able to find one in his size.

The average American man stands at about 5 feet 9 inches, has a 40-inch waist, and a Body Mass Index of around 30 percent. For clothing, he’ll likely fit in a 40x32 pant, size large T-shirt, and a size 10.5 sneaker. But for anyone larger, including the 34.1 percent of overweight men in the U.S., the options are limited.

In the past decade or so, marketing has diversified to not only include traditionally thin standards of beauty. Plus-sized models walk more runways, more lingerie is marketed for all body types (spearheaded by Rihanna’s Savage x Fenty line), and the #bodypositive hashtag on Instagram has garnered over 17.9 million posts. Online retailer ASOS even offers a “See My Fit” feature that lets you view a garment on different sized models.

Society has made great progress in sizing inclusivity and a push for gender-neutral clothing has led brands like New Balance, Nike, and more to increase their effort of appealing to a diverse range of people. Still, most of the displays in plus-sized fashion have one thing in common: they almost always depict women. Even though the plus-sized community is reaching new and deserved heights of representation and inclusion is something to be celebrated, their male counterparts are still largely excluded from the conversation.

One size doesn’t fit all

Evans, a stylist and model who goes by the moniker “Fat Chuck Bass” on Instagram, believes part of the reason plus-sized menswear trails behind womenswear is simply because men tend to keep quiet about their needs and struggles and have for a long time. “Guys are only now starting to feel that we have the space to speak candidly about our body image issues and things like that,” he tells Input. “But women have been doing that for years.”

Toxic expectations and standards around masculinity, whether in broader society or interpersonal circles, prevent many men from voicing frustration when it comes to their body image even though 30 to 40 percent of men are anxious about their weight. Glorification of svelte and muscular male body types, seen through professional athletes, Hollywood representation, and familial upbringing, can be a difficult barrier for a man to overcome alone.

Underlying stigmas persist when it comes to what the male body should look like and what can be done to improve it. The internet has softened the blow marginally with its recent appreciation of “dad bods,” but when it comes to fatphobia and body image, men are more likely than women to develop an undiagnosed eating disorder because of the stigma surrounding men seeking psychological help.

Brands such as ASOS and Fashion Nova are go-to retailers for the plus-sized community because of their many sizing options, but purchasing from them only contributes to the issues of sustainability in fast fashion. Although NovaMen, for example, has a better selection of trendy pieces, the poor quality and unsustainability can turn away the eco-conscious shopper. Thrifting isn’t always an option either because TikTok’s #ThriftTok community has a tendency to clear out larger sizes when going for an oversized look or repurposing a bigger item into a “thrift flip.”

Lack of access and options causes frustration for men like Luca Barranco, a streamer, podcaster, and community manager, who wishes he could participate in more trendy styles. “Where is the balance for people who are shaped like me?” Barranco said. “Especially because I’m a transgender man, I have a couple of curves that most men typically don’t have and it’s hard to shop for that.”

For a shorter person with a larger midsection and chest, a slim-fit T-shirt just isn’t going to cut it.

When StitchFix, an online personal styling service, announced it would introduce more extended sizing for men last year, 25,000 people signed up for the waitlist. Brick-and-mortar clothing companies that adhere to plus-sized men larger than a size 2XL are mostly limited besides Destination XL, a company with more than 45 years in business. An online presence is on the rise with shops including King Size and Bad Rhino, which advertise toward the big and tall, but sizing is often catered more toward the latter than the former. For a shorter person with a larger midsection and chest, which is where men tend to carry most of their extra weight, a slim-fit T-shirt just isn’t going to cut it.

The women’s sector of the plus-sized market saw a nearly $4 billion increase between 2016 and 2020, while the men’s steadily decreased over the same time period. Without a more vocal demand for bigger, well-tailored, and stylish silhouettes, many brands won’t see plus-size menswear as a profitable venture.

On social media, some guys have taken it upon themselves to advocate for their fellow full-figured men. Yaniel Arroyo, Michael-Anthony Spearman, and Kelvin Davis are body-positive influencers who use their platforms to provide style tips and outfit inspiration for bigger-framed men. When Steven Green, a model under the inclusive Bridge Agency, appeared in Rihanna’s Savage x Fenty campaign in 2020, he noticed some brands began to reconsider their own body diversity and inclusion efforts. “I’ve seen small changes but we definitely have a long way to go,” he tells Input. “[Brands] are very reluctant because they haven’t actually tried it. Fear of the unknown is the biggest killer.”

Unfortunately, as a public figure or influencer with an untraditional body type, there’s bound to be some negative attention. One stereotype applied to overweight people is that they don’t (or have no desire to) dress up and put effort into their appearance. These stigmas can manifest in ugly ways on social media and even provide misguided justification for brands purposely avoiding plus-size men in their campaigns. “What I think is not being said is that you don’t see plus-size people in certain clothes because it’s not the image that [brands are] trying to portray,” Evans says.

Focus on being the healthiest version of yourself, regardless of the number on the scale or size on the clothing tag.

He also noted that Instagram’s community guidelines aren’t consistently effective in combatting online hate. Green’s advice to bigger men hoping to expand their platforms and be more confident in their skin is simple. “I keep my energy pure because so many people are looking at me in that light of inspiration,” he said. “You have to keep your energy for all of the people that do support you. Do what you can to stay in that space of knowing who you are. Continue to be consistent and take the risks.”

Late journalist and style icon André Leon Talley, a bigger man himself, made one of the most important remarks about being big and beautiful: “Health is beauty. Beauty is health.” As more plus-sized men find their place in an environment that typically refuses to make room, it’s important to focus on being the healthiest version of yourself, regardless of the number on the scale or size on the clothing tag.

Plus-size visibility is on the rise thanks to more body-positive campaigns and the recognition that bigger framed people can and should exist in editorial landscapes. But on the ground level, it will take more effort on everyone’s part for plus-sized men to reap the real benefits.