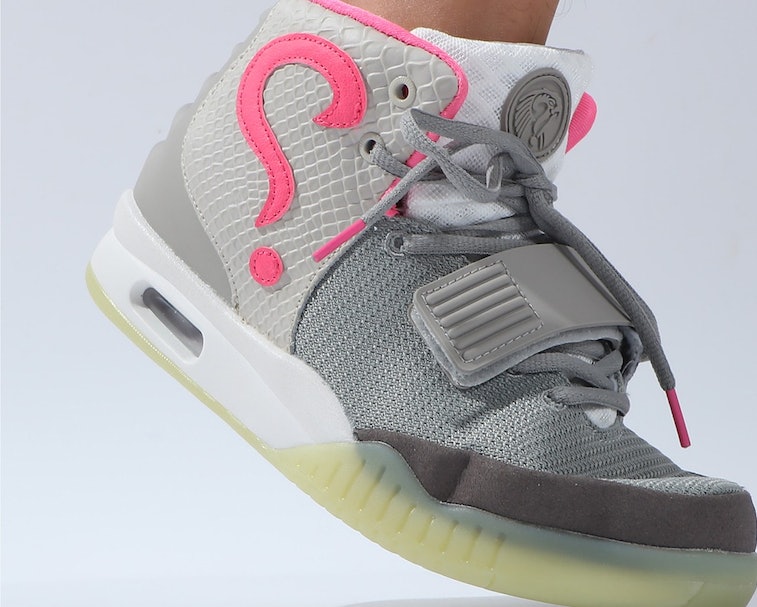 Nike has spent the last year-plus repeatedly turning to the courts in a heightened effort to crack down on bootleggers, but there’s one emergent brand that hasn’t been scared off yet.

Meta/Father LLC is set to launch its debut sneaker in the form of a clear and obvious Nike Air Yeezy 2 bootleg. Nicknamed “October Pink,” the shoe skews close to the original “Pure Platinum” color scheme with the addition of a question mark patch in place of the Nike Swoosh. Both the shape and material makeup —including faux snakeskin, suede, and mesh —of Meta/Father LLC’s sneaker serve as a carbon copy of Kanye West’s second and final Nike sneaker, and even the Horus logo from the tongue is recreated in precise detail.

Given the proliferation of third-party imitators and the status of the Air Yeezy 2 as one of the most coveted sneakers of all-time, demand for Meta/Father LLC’s bootleg should be high regardless of the debate on the merit of such designs. The nascent brand held a giveaway for the sneaker last month ahead of a still-unannounced release planned for December, but there’s a nontrivial chance Nike cracks down before it can even be launched.

Time can’t be on the brand’s side — Meta/Father LLC has apparently been in the works for several years and is the project of Hoyee Li and José Wong, the former once serving as a model for Yeezy. The brand’s Instagram page just began teasing the Yeezy 2 bootleg in October, which is curious timing considering how well publicized Nike’s legal battles have been over the past year.

Warren Lotas reached a settlement last December which he agreed never to infringe upon Nike’s designs ever again after a months-long legal battle over his Dunk copycats. Nike again reached a favorable settlement after targeting MSCHF for its custom Air Max 97 “Satan Shoes” made in collaboration with Lil Nas X, and it has also filed suit against online retailer Drip Creationz for its Air Force 1 knockoffs. An ongoing case against Lotas’ manufacturer La La Customs has since seen designer John Geiger, who also makes Air Force 1 lookalikes, added as a co-defendant — and Geiger has promised to see through his fight as sort of a last stand for creators of his ilk.

With all these developments in the background, it seems like only a matter of time before Meta/Father LLC draws Nike’s attention and is hit with a “cease-and-desist” letter and then, if necessary, a lawsuit. Such action could happen after the brand makes its debut release for the “Pink October,” but any successive efforts would seem to ramp up its liability.

This article was originally published on Dec. 6, 2021