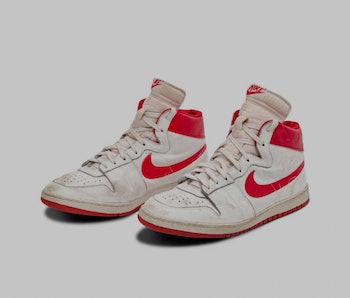 Prior to the Air Jordan 1, there was the Air Ship. The high-top basketball sneaker originally released in 1984 and is noticeable similar to Michael Jordan’s debut signature shoe. MJ actually wore the Air Ship early in his rookie season before the Air Jordan 1 was ready, and history-minded sneakerheads treat the “Pre-Jordan” every bit as collectible as the sneakers that bear his name.

Today, Sotheby’s is announcing an auction for the earliest known pair of Air Ships to be worn in-game by Jordan. The autographed sneakers have been traced back to Jordan’s fifth NBA game and were given to a ball boy for the opposing Denver Nuggets who’s held on to them ever since. Sotheby’s is expecting the final price for the rare Air Ships to hit $1 million to $1.5 million, which would make them the most expensive sneakers ever sold at auction. [The Nike Air Yeezy sample that fetched a record $1.8 million earlier this year was technically moved in a private sale.]

"Michael Jordan and the Jordan Brand helped redefine what a signature line formed around an athlete could be," Brahm Wachter, Sotheby's head of streetwear and modern collectibles, said in a release." These sneakers are a crucial part of the genesis of that story... but beyond that, it is also simply an incredible artifact that dates to the nascency of Michael Jordan's rookie season."

Dispelling a commonly held myth — While legend has it that the NBA banned the black-and-red Air Jordan 1s, the truth is that the league targeted the Air Ships with the same color scheme that MJ had worn prior. A technicality, however, wouldn’t prevent Nike from running with the narrative and marketing the Air Jordan 1 as a shoe too revolutionary for the NBA to handle. The story even made its way to David Letterman’s Late Night, where the legendary host jokingly kept a pair carefully hidden from view.

Previous pairs of Air Ships belonging to Jordan that have made their way to the market were printed with either “Air Jordan” or “Nike Air,” but the pair going up for auction is the only one to surface with a mark consisting only of “Air.” Included with the sale will be a staff pass belonging to Tommie Tim III Lewis, the former ball boy putting the sneakers up for auction along with Sotheby’s.

Bidding for the Air Ships will be held not online but at Sotheby’s in-person auction October 24 in Las Vegas at the MGM ARIA Resort and Casino. In order to break the current record for a sneaker auction, the final price will have to eclipse the $560,000 pair of game-worn and autographed Air Jordan 1s that closed last year just as The Last Dance aired its final episode.