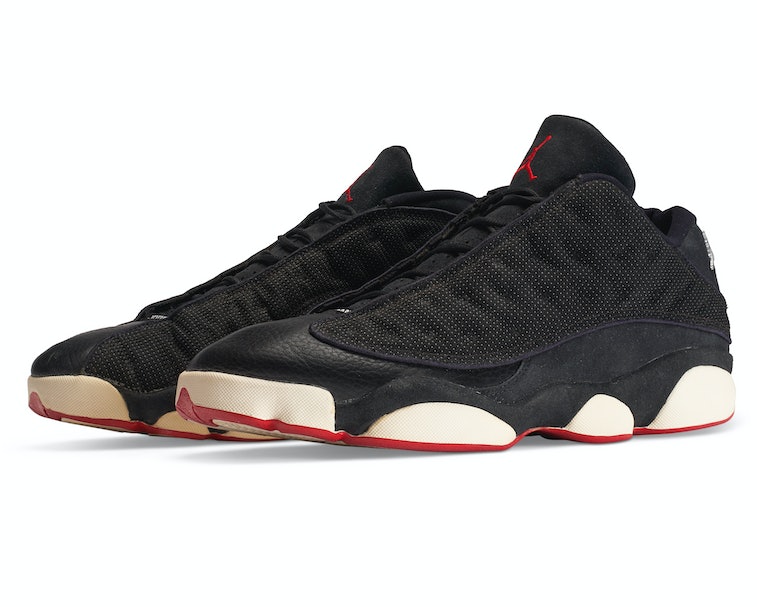 When it comes to Michael Jordan memorabilia — or any based in streetwear or sports history for that matter — someone’s always ready to pound the gavel. This time, luxury auction house Christie’s has gathered six artifacts from the NBA champion’s colorful history to sell to the highest bidder.

The collection may seem small compared to Christie’s previous 90-sneaker capsule, but it’s definitely an event for the big betters. Comprised of five of Jordan’s most coveted and collectible sneakers and a rookie card, each piece of the auction was specially selected because of its respective “rarity and monumental significance in Jordan’s extraordinary journey,” Christie’s said on its website.

Bow down to his Airness — Kicking off the crème de la crème of the sneakers is a pair of game-worn, dual-signed PE Jordan Low XIIIs. (You might recognize them if you watched The Last Dance). MJ wore the black and white basketball shoes during his second-to-last game as a Chicago Bull in Game Five of the 1998 Finals, bringing the auction estimation up to $750,000.

Two other dual-signed sneakers appear in the lots, including an original 1985 “Chicago” Jordan 1 and a “Bordeaux” Jordan VII from 1992. The former is estimated to realize between $40,000 and $50,000, while the latter is priced up to $30,000. Finishing off the sneakers are two player exclusives: a “Flint” Jordan XIII and a “Fire Red” Jordan V. They’re the most affordable of the bunch (if you’ve got that kind of spending money), with bids starting at $10,000 and $15,000, respectively.

The true pièce de résistance of the collection is a 1986 Michael Jordan-signed Upper Deck Fleer #57 rookie card. In 2006, you could send the card (if you had one) to Upper Deck, a private trading card company, to get it signed by MJ himself. According to Christie’s, only 23 copies of the original card were released, making this one of the rarest and most valuable trading cards in existence.

If you’ve got $2 million to $3 million lying around and you want to invest it in Michael Jordan history, you might as well do it on a trading card and not some worn underwear. It’s not even the highest price for a card ever listed; that title goes to Lebron James’s Rookie Patch card, which sold for $5.2 million in 2021.

Bidding for Christie’s “Six Rings – Legacy of the GOAT” auction kicks off in about two weeks and will last for another two. It’ll run from 10 a.m. EST on June 1 through 10 a.m. EST on June 14, so you still have time to sell your kidneys if you want to do some heavy bidding.