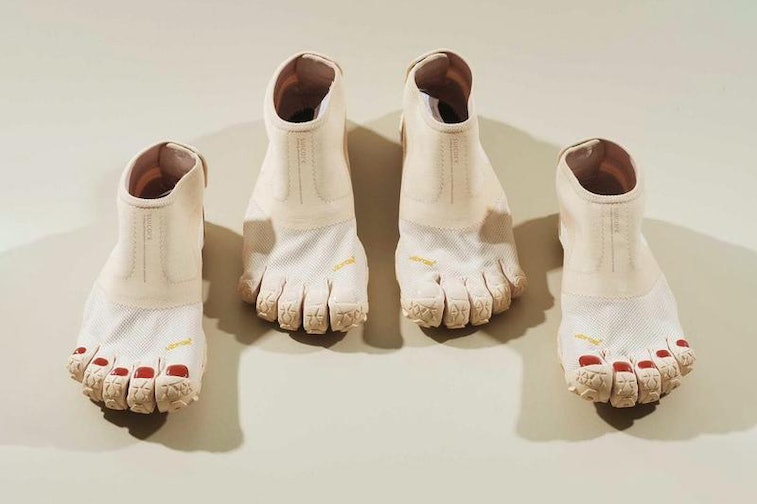 Vibram’s FiveFingers shoes are unhinged in their original model, seeing all five toes of a foot separated. Now, for no apparent reason other than to appease foot fetishists, Japanese label Midorikawa has taken the shoe to nightmare material by adding toenails. The footwear has also been dressed in three shades to make it look like skin, while the added toenails come in a natural beige or painted red color.

Unfortunately, this isn’t the first time Vibram’s horrific FiveFingers have toed their way into the fashion world. Last fall saw an unsettling collaboration between the brand and Balenciaga, which resulted in a heeled iteration of the FiveFinger shoe. Between that, Vibram’s newest partnership, and the rising popularity of Maison Margiela’s Tabi split-toe shoes, footwear seems to be keeping us on our toes — let’s hope the trend doesn’t get its foot in the door.

Toe-tally gross — Midorikawa isn’t the only brand to blame for its realistic toe shoes. The footwear is a collaboration between the label and another Japanese brand, Suicoke, perhaps to challenge where consumers draw the line. Their partnership comes hot off the heels of Suicoke’s more tasteful Dr. Martens sandals.

As for the nauseating toe shoes, they bear a resemblance to bare feet, mirroring COMME des GARÇONS’ oxford shoe design from years ago — even down to the red nail polish. The Japanese footwear, however, is more genuine thanks to its skin-colored tones and glove-like fit. If the uncanny valley effect can apply to shoes, Midorikawa and Suicoke have nailed the look.

The Japanese brands have even crafted the shoe in three color schemes — Ivory, Snow, and Mocha — so everyone can rock the barefoot look. While we applaud the brands for their inclusivity, we respectfully don’t think this product needed to be made at all, let alone in different hues.

Treading on our toes this fall — It’s inevitable that someone will buy the shoes, though, whether as a joke or a fashion statement. Luckily, the footwear doesn’t launch until the end of this summer, as part of Midorikawa’s Fall/Winter 2021 collection, so we have time to mentally prepare — as if they haven’t already scarred us for life.

No price has been set for the shoes, but know the price is high — not only are Midorikawa and Suicoke sought after Japanese brands, but anyone you know can and will avoid you if you’re donning this footwear. Wear at your own risk.