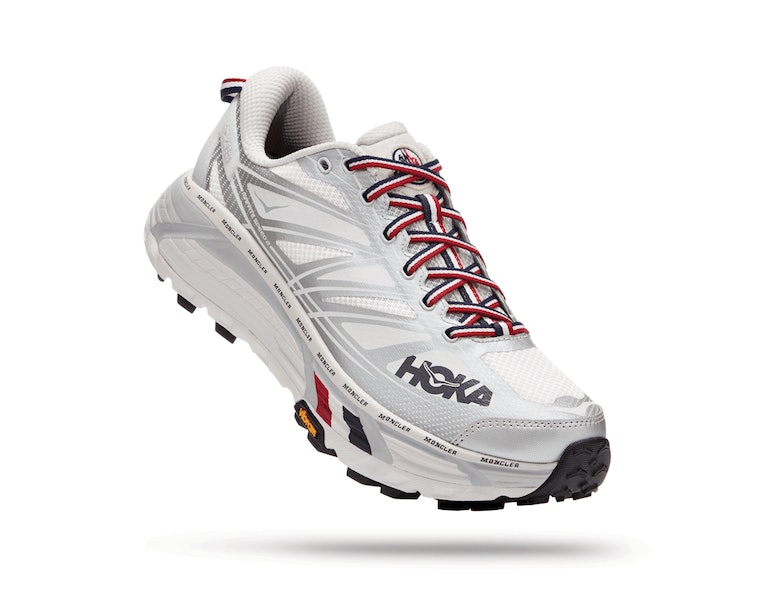 Hoka One One and Moncler have joined forces to show their shared love of the mountains.

The two brands have unveiled their take on the Mafate Speed 2, a running sneaker designed for extreme terrains and their first collaborative effort. A super clean silver and white color scheme makes up the majority of the shoe, while red, white, and blue accents invoke Moncler’s namesake town in the French mountains . The colors bring the perfect amount of pop through the laces, underneath which appears Moncler’s logo on the tongue, while the French flag appears at the forefoot of the midsole.

A repeating “Moncler” print wraps around the sneaker at the border of the midsole and upper, completing a sleeper competitor for best shoe of the winter. Whether you want to continue running through ice or snow or just want something casual and sturdy when the streets are frozen over or covered in salt, Moncler’s Mafate Speed 2 is both an attractive and practical choice.

A high-tech runner — Hoka One One has garnered a dedicated following amongst hardcore runners as it caters to the very specific needs of distinct terrains. The Mafate Speed 2 boasts the hearty midsole the brand is known for, made out of a lightweight EVA foam and sculpted into a “Meta-Rocker” shape to optimize the heel-to-toe transition.

Hoka’s Matryx technology provides stability in the shoe’s upper, which is a must if you’re running on an uneven terrain. To maximize grip, a 5mm lugged Vibram outsole is composed of special composition of rubber intended for wet rocks.

Our only consistent gripe with Hoka One One is that it’s color schemes miss more often than they hit, but that problem is almost always solved through collaboration. Bringing Moncler into the fold imbues a sense of luxury that can be found in the Italian brand’s status symbol puffer coats, which is reflected with a higher-than-usual price tag of ~$294.

Moncler’s take on the Mafate Speed 2 is available now at its House of Genius stores, pop-ups, and select boutiques worldwide. But if you’re looking to shop online, you’ll be able to do so when the kicks hit Hoka One One’s website on December 1.